News--Women Military Re-enactors: The Exceptions and The Rules 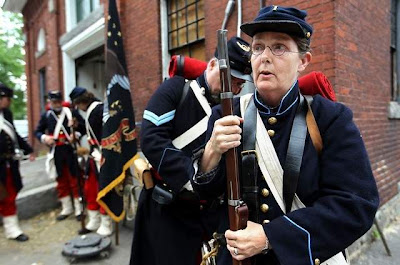 Hoop skirts and washboards don't appeal much to Joyce Henry, so she found another way to relive the Civil War — as a man. With her breasts tightly bound, shoulder-length red hair tucked under a shaggy auburn wig and upper lip hidden by a drooping mustache, Henry impersonates Lt. Harry T. Buford, a real-life Confederate soldier.

The impression could hardly be more accurate since Buford, too, was a woman. He was invented by Loreta Janeta Velazquez, a Cuban-born woman from New Orleans who fought as a man in a series of Civil War battles including the First Battle of Bull Run, according to her autobiography.

Researchers have documented more than 200 such cases. And today, a small number of women follow suit by donning blue and gray uniforms as Civil War re-enactors. A century and a half ago, women weren't allowed into military service; masquerading as men was the only way in for those who weren't satisfied with supporting the war effort from home or following their husbands' military units around. As the country marks the 150th anniversary of the War Between the States, some female re-enactors still cling to secrecy — not just for historical accuracy but because uniformed women aren't always welcome in the male-dominated hobby.

Some of these women are easily spotted by their lack of attention to detail. Others go to great lengths and expense to avoid detection. Henry, of Williamsburg, Va.,said she even got an FBI expert to teach her to apply facial hair. "My goal has always been to be as authentic as possible," said Henry, a former Petersburg National Battlefield ranger who is now head coachman at Colonial Williamsburg. She said she has spent nearly $3,500 on her Civil War outfit and gear, including an $850, custom-tailored, gray wool frock coat.

Image Caption: Elizabeth Charlton, right, gets help with her backpack as she prepares to portray a Civil War soldier at a Memorial Day event at Bellevue Cemetery in Lawrence, Mass. [Photo by The Associated Press]

My wife also impersonates a Confederate soldier at reenactments. One elderly lady approached her a few months ago and said that she wasn't fooled a bit because my wife was way to pretty to try and be a man. Personally, I don't see anything wrong with a woman playing a man as long as she attempts to blend in. Spectators can't tell the difference until they get up close and we need all the soldiers we can get. Great blog.