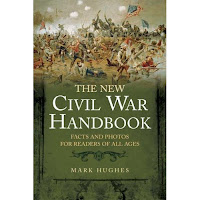 Clear and concise captions accompany nearly 150 images, 2 maps, 12 charts, 4 lists, a glossary and bibliography. Those who are approaching the American Civil War and history educators are well served by Mark Hughes handbook. Hughes was inspired by a previous handbook that he read during childhood. Especially appropriate is the first list in the first section: Naming The War. The twenty alternative names lend themselves to discussing the war's different perspectives. Hughes included CWL's 'point-of-view' name for the war: The Slaveholders' Rebellion. To underscore this list, Hughes immediately follows the list with Civil War Voices, over 8 pages of quotations from the war's participants.

Charts of the organization of the Union and Confederate armies, enlistments and casualties, losses in major battles, military engagements by states (Utah, Nevada, Vermont, New York, Idaho Territory, Illinois, and Washington DC, each had one) lend themselves to discussions. Do you know the 37 battles that have two names? How about numbers of Union enlistments from Southern states? What percentage of wounds were caused by bayonets? How about a list of major causes of death besides wounds? Also nice to see are the figures regarding military prisons.

A fine bibliography and glossary are included along with websites that cover public collections and discussions of the war. The New Civil War Handbook: Facts and Photos for Readers of All Ages by Mark Hughes lends itself to a variety of classroom activities and discussions. This book will also be used by buffs to quiz each other and add to their general knowledge of the war.
Posted by Rea Andrew Redd at 2:30 PM

Thank you for mentioning "The New Civil War Handbook" by Mark Hughes. We have copies available with signed book plates. We also offer a bulk discount for Round Tables who may want to pass these out and use as membership premiums.

This is truly a wonderful book for the budding Civil War enthusiast. It is full of great images, information, and content.