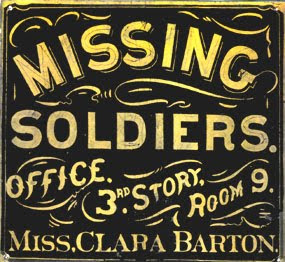 The National Museum of Civil War Medicine (NMCWM) will open the Clara Barton Missing Soldiers Office Museum this year at 437 7th St. NW, Washington. The General Services Administration (GSA), which owns the building, chose the Frederick, Md., non-profit museum whose mission is preserving and researching the legacy of Civil War medicine, to operate the museum.

Barton lived in the third-floor rooms during and immediately after the war. Her living quarters and office were there until 1867. During the war supplies for her nursing work were stored in these rooms. In 1865 Barton hired staff and opened the Office of Correspondence with the Friends of the Missing Men of the United States Army.

The office responded to more than 63,000 letters seeking information about soldiers and published lists of missing men. The fate of more than 22,000 soldiers had been learned by the time the office closed in 1867. The doors to the apartment were closed in 1875. The suite of rooms was discovered in 1997 as GSA workers were preparing the building for demolition.

In announcing the new site NMCWM Executive Director George Wunderlich said, “What she did in nursing is incredibly important and we don’t want to diminish that at all. But to say that Clara Barton is a nurse is a gross understatement of her importance. The fact is that she was a relief organizer at a time when women didn’t do that.”

He said, “The story of the rediscovery of the building as well as the story of Barton’s life while she lived there will be the essence of the visitor experience at the museum.” Barton’s words will be used in audio scripts and exhibit labels. Artifacts, images and sounds will enhance the interpretation.

“The overarching theme for the visitor experience will be the sensation of discovering a place, and through the place a remarkable person, and through the person the values that shaped her life and work,” Wunderlich said. The National Museum of Civil War Medicine operates out of a downtown Frederick building with nearly 7,000 square feet of exhibit space. 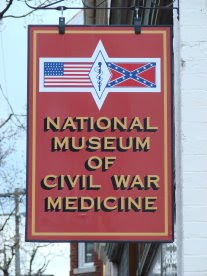 Its Pry House Field Hospital Museum on the grounds of Antietam National Battlefield, where Dr. Jonathan Letterman devised his system of battlefield medicine, is interpreted as a house museum. Its large bank barn was a field hospital that treated more than 400 men after the battle.

For More Information on the National Museum of Civil War Medicine

CWL: The work of NMCWM is an essential resource for enthusiasts and scholars. Its work over the past 15 years has done much to broaden and deepen our understanding of the lives and experiences of American Civil War soldiers. CWL encourages your support of this extraordinary organization, its museums, and its educational efforts.
Posted by Rea Andrew Redd at 2:42 PM