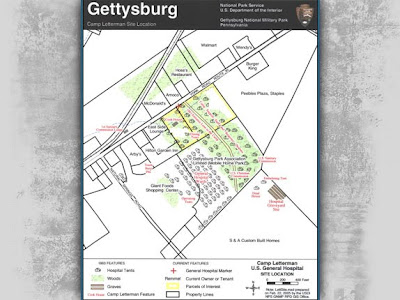 It's all over except the decision from the Pennsylvania Gaming Control Board. For the second time in five years, Gettysburg has been subjected to a pitched PR battle over the location of a gaming business. The first was a proposed full-sized casino at routes 15 and 30, across the street from a cluster of hotels and soon to be joined by a superstore on the west side of U.S. Route 15. The current proposal, much smaller in size, would involve the already-existing Eisenhower Inn and Conference Center a half-mile beyond the southern boundary of Gettysburg National Military Park.

The two sites have a couple of aspects in common: neither was involved in fighting or significant action in the epic battle of 1863, but both were fought voraciously by opponents of gambling. Meanwhile, the real preservation needs of Gettysburg have been lost in the controversy; the imminent threat to land that was directly involved in the battle, especially its aftermath.

The Camp Letterman Field Hospital off York Road held more than 20,000 wounded and dying soldiers from the North and South who received equal care, the first such combined hospital of the war. Despite the best medical care available at the time and the compassion of civilian volunteers, scores of soldiers among the sea of tents suffered and died on the site. There was amputation, bleeding, death and burial on the property. There might still be remains beneath the ground that were missed in the exhumation of graves through the years after the battle for removal to cemeteries in the North, to the Gettysburg National Military Cemetery or to Hollywood Cemetery in Richmond. Some of what was Camp Letterman has already been lost to commercial and residential development. Most of the remainder is now up for sale for additional development ? more box stores, restaurants, condos and asphalt to covering actual hallowed ground.

There are indications that Camp Letterman's periphery extended further to the south and east than previously believed. The precise boundaries remain unclear because there has never been a definitive archaeological study of the site. For more than 10 years, the Gettysburg Battlefield Preservation Association has sought to draw public attention to the Letterman dilemma. At one point we spearheaded a successful drive to dissuade a large chain store from developing on a remaining portion of the property.

At the same time, GBPA successfully negotiated with developers of a proposed residential area on another part of the property to expand archaeological studies of its property, preserve lots where significant Letterman features were uncovered and develop walking trails and observation points.

The downturn in the economy torpedoed those development plans and the site investigations. Other aspects of the cooperative progress of 2008 also might be in jeopardy. Our work to save Letterman through the last 10 years has been an all-volunteer effort as has been our success at preserving the 145-acre Daniel Lady Farm and meticulously restoring its historic house and barn.

The opponents of the casino proposals have mustered considerable resources for their cause, including billboards and television ads. Several people in the effort directly attacked the GBPA for its stance in support of the Mason-Dixon proposal at the Eisenhower. Would such a crusade been directed toward the real threat to the land of Camp Letterman?

Agree with it or not, though, that is water over the dam. The GBPA is prepared to work in concert for a new phase of the Camp Letterman legacy. No matter what the outcome of the casino application or their position on the issue, we invite all organizations and individuals truly committed to preserving the precious hallowed ground of Gettysburg to join us in a comprehensive campaign to acquire and properly investigate the Camp Letterman site and preserve it undeveloped into perpetuity in remembrance of the Americans of the North and South who suffered and died there.

In 1959, the Gettysburg Battlefield Preservation Association was founded as part of a national campaign to prevent development from further encroaching on the battlefield. Through the last 51 years, that has resulted in the acquisition and preservation of one-third of the current Gettysburg National Military Park. 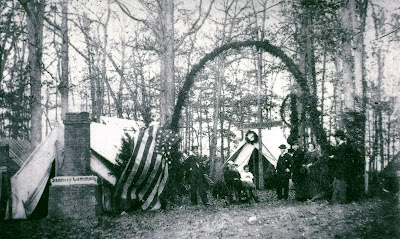 Preserving what is left of Camp Letterman will take teamwork of those who have been pro-casino, anti-casino or somewhere in between; a dedication of nonprofit preservation and education organizations, private business and a small army of volunteers.

After the first of the year, the GBPA and others of like mind will initiate a call to rally resources to save Camp Letterman. Watch for it. We start things off by challenging The Patriot-News to play an appropriate role. After all, in 1959, Parade magazine, which is part of the hefty Patriot-News every Sunday, was instrumental in organizing the national campaign that created the GBPA and led to turning the tide of development of the hallowed ground of Gettysburg. The tide has been turned, but the struggle is not over.

Jay Purdy is a member and on the board of directors for the Gettysburg Battlefield Preservation Association.