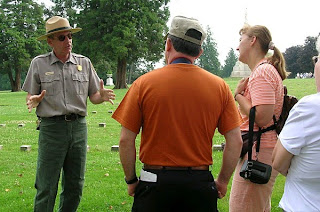 The themes of The War Begins – 1861 and Key Moments and Commanders of the Gettysburg Campaign will be the focus of Gettysburg National Military Park's Winter 2011 Lecture series. The park's visitors center wil host the events on Saturdays and Sundays beginning on Saturday January 8 and ending Sunday March 13; each meeting begins at 1:30 pm.Visitor Center, Saturdays and Sundays, 1:30 p.m. Lectures from January 8 to February 27 will be held in the center's film Ttheaters and the lectures on March 6, 12, and 13 will be held in the in Ford Education meeting room. Weeks #2 and #9 have only one lecture during the weekend; all other weeks have two lectures.

Week #4
Saturday, January 29 1861: Equipping the Armies – The Weapons of 1861
Sunday, January 301861: "Promiscuously uniformed and poorly armed” The Creation of the Confederate States Army

Week #5
Saturday, February 5 Gettysburg: Gettysburg Viewed Through a Kaleidoscope of Historical Lenses
Sunday, February 6 1861: "One of the most cowardly and disgraceful acts:” The Destruction of the Norfolk Navy YardApril 21, 1861,

A PDF of this document is at GNMP's webstite This schedule is subject to change and will be updated as changes occur on the park web site at http://www.nps.gov/gett. For additional information, inquire at the park information desk or call (717) 334-1124, ext. 8023 or 8024.