New and Noteworthy--The Furtherst Tide: Confederates At The Gates Of Harrisburg 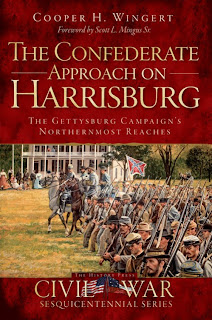 Pennsylvanians, fans of the Army of Northern Virginia and enthusiasts of the 1863 Pennsylvania Campaign are well served by Cooper Wingert's The Confederate Approach On Harrisburg: The Gettysburg Campaign's Northernmost Reaches. Personalities, terrain, military objectives are smoothly woven into a compelling story of an invasion and an emergency response.

On June 15 1863, while wading the Potomac river, Richard Ewell's Second Corps of the Army of Northern Virginia, understood that Pennsylvania was the target and Harrisburg was the bull's eye.  On June 12 Governor Andrew Curtin anticipated the invasion and called up the state's militia for the dual purpose of patrolling Fulton, Adams and York counties and constructing defenses for Harrisburg.  During the next fifteen days, Chambersburg, Gettysburg, Carlisle and York would be seized by Ewell's divisions and their assigned cavalry escorts.

Spies, scouts and assorted ner' do wells are pushed forward, through and behind the Confederate advance. Whirl becomes king for nearly three weeks. The New York State Militia arrives in Harrisburg and makes progress with the east bank earthworks. On June 28 a Confederate cavalry brigade galloped into Mechanicsburg, a mere 30 minute dash west of Harrisburg.  Brief artillery salvos occurred around Peace Church. June 29 at Oyster Point the closest Confederate approach to Harrisburg occurred. The artillery skirmish provided cover for scouts to reach a spot from which  Harrisburg's fortifications were viewed. Ewell prepared orders for an attack on June 30, but other
orders reached him from Lee.  Ewell's divisions [Rodes, Early, and Johnson] were to return to the Chambersburg-Gettysburg area.

Wingert presents clearly and concisely the many personalities and circumstances of Ewell's approach to Harrisburg. Maps are admirably drawn by John Heiser, cartographer for GNMP and Gettysburg Magazine.  Photographs include the many well known soldiers and civilians; many photographs are historical and present day images of regional locations. Wingert provides an insightful and detail discussion of the Confederate march further east of Gettysburg. Segments of the text are short and focused; the author stays within the limits of the primary sources available; artificial suspense is not injected into the story. The Confederate Approach On Harrisburg: The Gettysburg Campaign's Northernmost Reaches is an example of local history well written.