News----Gettysburg POWs' Photograph On US Stamp Recognized By Descendant 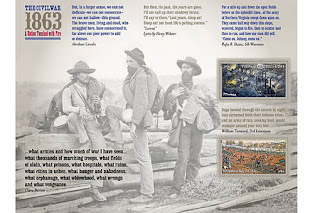 A Postal Service Event In Gettysburg Features A Descendant of Rebels In A Famous Stamp  Photo, Tom Barnes, Pittsburgh Post-Gazette, May 23, 2013.

Ever since 1949 -- when he was only 10 years old -- Clate Dolinger of southwestern Virginia has known that the three Confederate soldiers in a famous Civil War photo taken in July 1863 were his ancestors. "The soldier on the right is Andrew Blevins, and he was my granddaddy's granddaddy," he said in a cell phone interview Wednesday. "The one on the left is his son, Ephraim Blevins, and the one in the middle is my grandmother's great-uncle, John Baldwin."

Mr. Dolinger spoke to a reporter while making a six-hour drive from his home in Pembroke, Va., to Gettysburg, Pa., where today he will speak at a news conference held by the U.S. Postal Service as it unveils a new postage stamp honoring the battle of Gettysburg and, in particular, a part of it called Pickett's Charge, fought July 3, 1863. The stamp shows Southern forces under Gen. George Pickett trying unsuccessfully to dislodge Union forces from a hilltop stronghold.

On the back of each sheet of Gettysburg stamps will be the photo taken by famed Civil War photographer Mathew Brady, showing the three Confederate soldiers related to Mr. Dolinger. They were taken prisoner on the battle's last day. The photo shows them carrying extra bedrolls but without weapons. They shuttled to various prison camps and often were put on burial detail.
"Humiliated and knowing they would be transferred to a POW camp, they collected extra clothing and blankets from the dead, to prepare for their internment," Gettysburg officials said in a news release. The three Southerners weren't released by Northern officials until after the war ended in April 1865.

Mr. Dolinger said he stopped into his local post office a couple weeks ago and saw a sheet of the new Pickett's Charge stamps, with the photo of his family members on the back.
"I told the postal clerk that I wanted five sheets of these stamps," he said. "She said why, and I said, 'Because that's my kin.' She said, 'The men in the photo are your people?' and I said yes. They were drafted into the [Confederate] army and they had to go."

The Virginia postal official called Washington, D.C., and told them about Mr. Dolinger, and he was invited to speak at today's stamp ceremony. Mr. Dolinger, now a 73-year-old barber, is still cutting hair every day for only $4 a head.  Full Text Continued At Pittsburgh Post-Gazette, May 23, 2013
Posted by Rea Andrew Redd at 7:17 AM

Ephraim Blevins is my 2nd greatgrandfather.