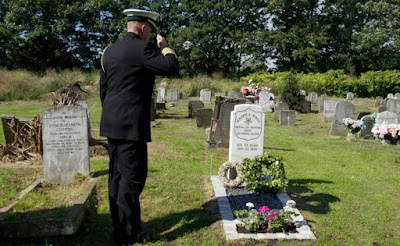 New and Noteworthy: Drilling For Battle and Drilling for Reenactments 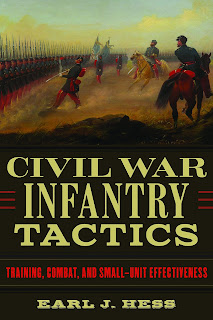 From the Publisher: For decades, military historians have argued that the introduction of the rifle musket-with a range five times longer than that of the smoothbore musket-made the shoulder-to-shoulder formations of linear tactics obsolete.

Author Earl J. Hess challenges this deeply entrenched assumption. He contends that long-range rifle fire did not dominate Civil War battlefields or dramatically alter the course of the conflict because soldiers had neither the training nor the desire to take advantage of the musket rifle's increased range.

Drawing on the drill manuals available to officers and a close reading of battle reports, Civil War Infantry Tactics demonstrates that linear tactics provided the best formations and maneuvers to use with the single-shot musket, whether rifle or smoothbore musket.

The linear system was far from an outdated relic that led to higher casualties and prolonged the war. Indeed, regimental officers on both sides of the conflict found the formations and maneuvers in use since the era of the French Revolution to be indispensable to the survival of their units on the battlefield. The training soldiers received in this system, combined with their extensive experience in combat, allowed small units a high level of articulation and effectiveness.

Unlike much military history that focuses on grand strategies, Hess zeroes in on formations and maneuvers (or primary tactics), describing their purpose and usefulness in regimental case studies, and pinpointing which of them were favorites of unit commanders in the field. The Civil War was the last conflict in North America to see widespread use of the linear tactical system, and Hess convincingly argues that the war also saw the most effective tactical performance yet in America's short history.

Hess offers not just a re-statement of tactical manuals but specific uses of the tactics in specific battles. For multiple maneuvers he discusses the 32nd Indiana at Shiloh, the 83rd Pennsylvania at Gaines' Mill, 61st and 64th New York at Antietam, 63rd New York at Fredericksburg,19th Ohio at Stones River, 23rd Tennessee at Chickamauga; 12th New Jersey at Burgess' Mill.  Diagrams show the movement of the units with the orders that were given.

This book will delight all who are in command of American Civil War reenactors and wish to replicate actual battlefield movements.

Posted by Rea Andrew Redd at 10:18 PM No comments: 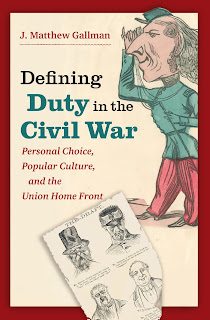 This path breaking study investigates how men and women, both white and black, understood their roles in the People's Conflict. Wartime culture created humorous and angry stereotypes ridiculing the nation's cowards, crooks, and fools, while wrestling with the challenges faced by ordinary Americans. Gallman shows how thousands of authors, artists, and readers together created a new set of rules for navigating life in a nation at war.
Posted by Rea Andrew Redd at 9:48 PM No comments: 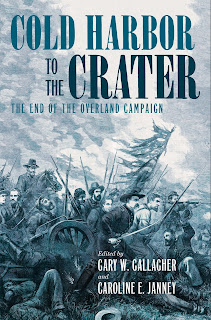 Cold Harbor to the Crater: The End of the Overland Campaign, Gary Gallagher and Caroline Janney, editors,  The University of North Carolina Press, 360 pages. $35.00, September 28, 2015

From The Publisher:  Between the end of May and the beginning of August 1864, Lt. Gen. Ulysses S. Grant and Gen. Robert E. Lee oversaw the transition between the Overland campaign—a remarkable saga of maneuvering and brutal combat—and what became a grueling siege of Petersburg that many months later compelled Confederates to abandon Richmond. Although many historians have marked Grant's crossing of the James River on June 12–15 as the close of the Overland campaign, this volume interprets the fighting from Cold Harbor on June 1–3 through the battle of the Crater on July 30 as the last phase of an operation that could have ended without a prolonged siege. The contributors assess the campaign from a variety of perspectives, examining strategy and tactics, the performances of key commanders on each side, the centrality of field fortifications, political repercussions in the United States and the Confederacy, the experiences of civilians caught in the path of the armies, and how the famous battle of the Crater has resonated in historical memory. As a group, the essays highlight the important connections between the home front and the battlefield, showing some of the ways in which military and nonmilitary affairs played off and influenced one another.

Posted by Rea Andrew Redd at 9:30 PM No comments: 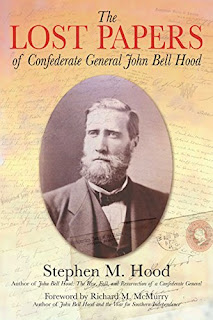 Since the end of the war, writers have offered speculations regarding Hood military decisions and campfire conduct. Soon military historians will have to reckon with Stephen Hood's The Lost Papers of Confederate General John Bell Hood and revisit the Atlanta Campaign and the battles of Spring Hill and Nashville.
Posted by Rea Andrew Redd at 8:01 PM No comments:

News---Loving the Victorian Life, They Recreate It For Themselves Everyday 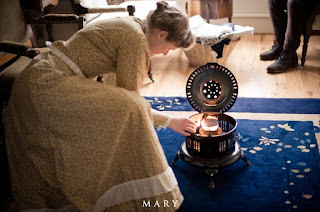 
My husband and I study history, specifically the late Victorian era of the 1880s and '90s.  Our methods are quite different from those of academics. Everything in our daily life is connected to our period of study, from the technologies we use to the ways we interact with the world.

Five years ago we bought a house built in 1888 in Port Townsend, Washington State — a town that prides itself on being a Victorian seaport.  When we moved in, there was an electric fridge in the kitchen: We sold that as soon as we could. Now we have a period-appropriate icebox that we stock with block ice. Every evening, and sometimes twice a day during summer, I empty the melt water from the drip tray beneath its base.

Every morning I wind the mechanical clock in our parlor.  Each day I write in my diary with an antique fountain pen that I fill with liquid ink using an eyedropper.  My inkwell and the blotter I use to dry the ink on each page before I turn it are antiques from the 1890s; I buy my ink from a company founded in 1670. My sealing wax for personal letters comes from the same company, and my letter opener was made sometime in the late Victorian era from a taxidermied deer foot.

There are no modern lightbulbs in our house.  When Gabriel and I have company we use early electric lightbulbs, based on the first patents of Tesla and Edison. When it's just the two of us, we use oil lamps. When we started using period illumination every day, we were amazed by how much brighter the light is from antique oil lamps than from modern reproductions.

Full Text Continued at Text's Source:  Vox
Posted by Rea Andrew Redd at 9:48 AM No comments: 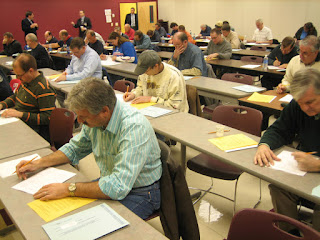 Angela Atkinson, Supervisor Park Ranger / LBG Supervisor is pleased to announce that an examination will be held in Gettysburg on Saturday, December  5, 2015 as part of the four-tiered process of licensing individuals to guide at the Gettysburg National Military Park. At this time we do not know how many individuals taking this exam will ultimately receive a guide license. Candidates who successfully complete all four tiers (explained in the documents below) will ultimately be licensed as the needs of the Gettysburg National Park, the Gettysburg Foundation, and the Licensed Battlefield Guide Service dictates.  No new examinations will be given until such time as all successful candidates are processed and licensed.  One should not be expected again for a period of several years and certainly not as regularly in the past.
On this page will be found links to all documents you will require in order to understand the licensing process and what will be expected of successful candidates.   Instructions on how to register for the upcoming December 2015 test are also linked below.  Please read all documents before registering.
Examination Site:
The December 5, 2015 Licensed Battlefield Guide Examination will be held on the Gettysburg Campus of the Harrisburg Area Community College,  731 Old Harrisburg Road, Gettysburg, Pennsylvania.  Candidates will enter through the main lobby. Please be prompt. Late arrivals cannot be accommodated.