New and Noteworthy: A Soldier's Letters Home as Source Material 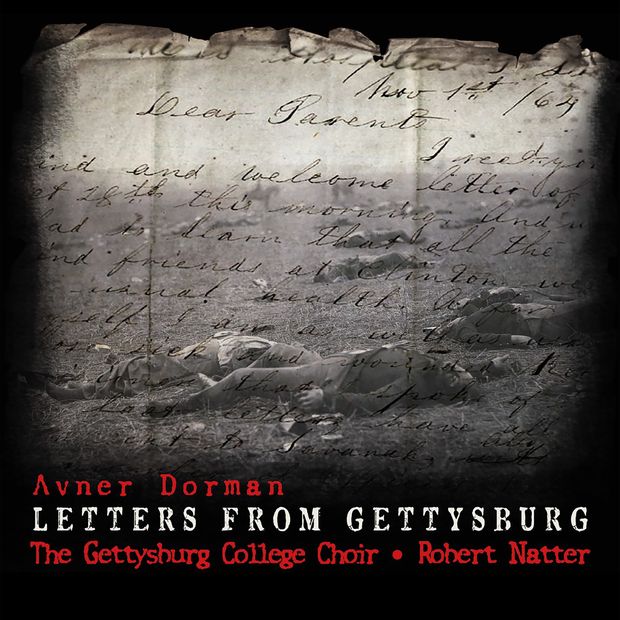 A new recording features the composer’s five-movement work commemorating the Civil War battle, which draws from the letters of a mortally wounded soldier and his mother.

Allan Kozinn, The Wall Street Journal, June 29, 2019
Composers who write works about war often gravitate toward vocal settings—nothing evokes the mixed currents of terror, bravery, pain and confusion as unequivocally as the human voice—and for the most part, they seek their texts in the works of battlefield poets and chroniclers, from Homer and Li Po, to Walt Whitman and Wilfred Owen, whose work captures both the immediacy of mortal danger and the tragedy of wasted life.

When Avner Dorman was commissioned by Gettysburg College, where he teaches composition, to write a work commemorating the 150th anniversary of the Civil War battle that was fought in the school’s vicinity, he decided to look for street-level realism rather than poetic artistry. His first stop was the college’s Civil War Institute, where he examined soldiers’ letters, and opted to focus on a single combatant, on the theory that one soldier’s observations could yield universal truths about the experience of war. The soldier he settled on was Lt. Rush Palmer Cady, a New Yorker who was wounded on the battle’s first day—a bullet passed through his arm and lodged in his lung—and died 23 days later, on July 24, 1863.
Cady’s letters, and some from his mother, who traveled to his bedside and wrote to her husband as she grappled with the inevitability of their son’s death, are the basis of “Letters From Gettysburg,” a wrenching score for choir, soprano and baritone soloists and percussion ensemble that had its premiere at the college in April 2013. It is now the title piece of a new collection of Mr. Dorman’s works on Canary Classics, the label run by the violinist Gil Shaham. (Works Mr. Dorman composed for Mr. Shaham and his sister, the pianist Orli Shaham, fill out the disc.) Mr. Dorman, a prolific Israeli composer who studied with John Corigliano and shares his former teacher’s penchant for an eclectic, emotionally direct musical language, chose not to set the letters intact, but to instead use fragments, mined for their imagery and emotional punch. Some are long enough to paint vignettes from the battle; others are splintered into short phrases, or even single words, distributed through the choir.


In “Battle,” the third and most complex of the work’s five movements, phrases like “Ammunition—sixty rounds apiece,” “Military honors—of his soldier grave,” “So much blood and suffering,” “fires all night,” and the words “death,” “mud,” “pain,” “rain” and “remains” are chanted chaotically and ad libitum by the choir, effectively compressing Cady’s narrative into the aural equivalent of a brisk film montage. A more formal choral setting emerges from this improvised stream of images, offering a more conventional narrative (“A shell which struck our rear hit a large stack of guns, killed a captain lieutenant and took off the arm and leg.…”), and leads to the choir singing the word “Blood!” repeatedly, in a three-note harmonic cluster.In parts of the first and fourth movements, “Kiss Me Mother” and “Dear Brave Boy,” which draw on the letters from Cady’s mother, Mr. Dorman’s choral writing moves inexorably from consonance to dissonance, increasing the tension with each syllable. Amanda Heim, the soprano soloist, sings the mother’s text, in the finale, with a moving sense of pained calmness—a quality heard in much of the choral writing as well. Lee Poulis, the baritone, gives a trenchant account of Cady’s first letter home in “Since I Was Wounded,” the work’s fifth movement                                                                                                                                                                   Mr. Dorman’s colorful but disciplined, intensely focused style is suited to the subject matter, and he has produced a work that appeals to pacifist sensibilities by showing the devastation of war as human, personal and direct. The Gettysburg College Choir and the Tremolo Percussion Ensemble—which is used vigorously in the “Battle” movement, and more subtly elsewhere—perform the piece with eloquence and precision under the baton of Robert Natter in this 2015 studio recording.Different sides of Mr. Dorman’s instrumental writing are on display in “After Brahms—Three Intermezzos for Piano” (2014) and “Nigunim (Violin Sonata No. 3)” (2011). “After Brahms” channels the sensibility of Brahms’s late piano music, in both its explosively turbulent and gently introspective manifestations, and is played with both power and poetry by Orli Shaham. “Nigunim” builds on the modal melodic turns of Jewish music (a nigun is a short, repeating melody that can be used in anything from prayer to klezmer performances; nigunim is the plural), expanded upon and recast in the Romantic bravura style. In that spirit, Gil Shaham gives the piece a high-energy, virtuosic reading, with firm support from Ms. Shaham on the piano.Still, both works have been issued on earlier Canary Classics discs, so while it’s good to revisit them, listeners interested in Mr. Dorman’s work would undoubtedly have preferred music that has not yet been recorded.                                Full Text Found at  Wall Street Journal, June 28, 2019            Amazon.com link to compact disk.
Posted by Rea Andrew Redd at 10:27 AM No comments:

New and Noteworthy: Army of the Potomac's Intelligence Gathering and Gettsyburg,

In this book, prolific military historian Peter Tsouras provides a detailed account of the operations of the Bureau of Military Information (BMI) in the Army of the Potomac from its creation in February 1863 through Confederate Gen. Robert E. Lee's surrender at Appomattox (9 April 1865). Framed as a biography of its founding leader, then Col. George H. Sharpe of the 120th New York Volunteer Infantry regiment, the book builds on previous studies by Edwin Fishel and William Feis. That said, Tsouras has done yeoman's work in finding new records documenting the work of Sharpe's intelligence unit.

George Sharpe was an affluent, well-connected attorney in upstate New York before the war and then, briefly, a captain in the 20th New York State Militia regiment mobilized in 1861. During the mass recruiting drive in summer 1862, he raised the 120th New York regiment and assumed its command. The regiment participated on the periphery in the disastrous battle of Fredericksburg in December.

Tsouras begins his story soon after Maj. Gen. Joseph Hooker assumed command of the Army of the Potomac. His predecessors, generals George B. McClellan and Ambrose E. Burnside, had not left him any military-intelligence resources. McClellan had relied on detectives hired by Allan Pinkerton, the head of a Chicago detective agency whose gross overestimates of the strength of Lee's army paralyzed the Union general. When President Abraham Lincoln dismissed McClellan from command, Pinkerton's detectives went home. Hooker, naturally eager for accurate information on Confederate troop strength and deployments, chose Sharpe to establish an intelligence operation as an adjunct to his headquarters and to collect useful information on Lee's army. Sharpe quickly found scouts who could infiltrate rebel lines and talented aides to oversee interrogations of deserters and compile Lee's order of battle.

Tsouras's accounts of the derring-do of BMI scouts behind rebel lines are most entertaining, but their length and granular detail are oppressive and obscure the larger picture of the value of Sharpe's efforts. Following as he does in Fishel and Feis's footsteps, the author delivers no new historical understanding of Union military intelligence. Other shortcomings include the many typos and repetitions in the narrative, as well as, more problematically, the author's penchant for using present-day military-intelligence terminology and acronyms in a Civil War context. Thus, we read that Sharpe was the creator of "all-source military intelligence." The BMI can and should be approached as a case study of military intelligence work done before it was institutionalized by the US Army in the twentieth century. But historians must resist the "whiggish" temptation to compare the practices of the "bad old days" to what are assumed to be today's better ones.
....
The author's evaluation of Sharpe as the unique example of top-rate intelligence work in the Civil War follows Fishel's myopic focus on the Army of the Potomac and overlooks significant intelligence operations in other Union armies and commands. For example, no historian has made a comprehensive study of Maj. Gen. William Rosecrans's significant intelligence work while he was commanding the Army of the Cumberland in Tennessee starting in fall 1862. The general directed a remarkably effective intelligence operation against Confederate forces in his front together with a far-flung security service throughout several states in his rear. In 1861, he used Ohio police detectives in western Virginia. In 1864, while in command of the Department of the Missouri with headquarters in St. Louis, he refined and expanded an already large intelligence apparatus that ranged from New Orleans to New York. In short, Rosecrans may have been the most consistent and sophisticated user of intelligence during the war. Until historians study these other operations, we must put off crowning Sharpe as the originator of high-quality Civil War intelligence work.
.....
George Sharpe's BMI was perhaps the best intelligence unit in the Union Army, but it certainly was not the first or, arguably, the most effective. Peter Tsouras's exhaustive research to piece together an account of Sharpe's wartime career should prompt historians to examine other important military-intelligence operations in the Civil War.

Full text of this review is found online at:  Michigan War Studies Reviews
Posted by Rea Andrew Redd at 10:08 AM No comments: