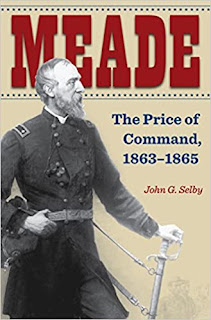 NE: John, to start, how did you become interested in writing a biographical account of George Gordon Meade that focused on his time as commander of the Army of the Potomac?

NE: What do you argue in your book?

JGS: Meade needs to be given his due as one of the top three Union commanders of the war. Not only did he perform well as a division and corps commander, but as the longest-serving commander of the largest army of the war, he won the largest battle of the war, and through two years of horrendous fighting finally forced the Army of Northern Virginia to surrender in 1865. Furthermore, my ranking of Meade is not novel or an academic exercise in the 21st century; it was Grant himself who recommended Sherman and Meade for the rank of major general in the regular army in 1864 because they were the “fittest officers for large commands.” Though Grant never pursued this recommendation with the vigor he gave to Sherman’s promotion, he never wavered from it either. NE: Before we get into the book, one aspect that caught my eye was sources. You did a critical rereading of available source material, how did you approach compilations like the O.R. and archival material? Also, it seems there were days with dozens of messages, how do you make sense of a battle day with so much correspondence? JGS: Not only days with dozens of messages, but one must make very detailed timelines of when messages were sent, and to whom, to understand why a decision say at 1:00 pm might be based on information received that morning, but already rendered problematic by another message sent by a general at 12:45 pm that had yet to reach headquarters. That said, I strongly argue that historians must carefully read and time the messages to get a minute sense of the ebb and flow of the battle and the decision making. Also, I would be the first to say that I wish we had some way of knowing all that was said, as opposed to what was strictly written down. We must rely on the letters, diaries, and memoirs of individuals for those bits of information, which by their very nature are fragmentary and shaped to convey a certain narrative. For example, how often did Meade and his chief of staff at Gettysburg, Daniel Butterfield, discuss information that was flowing in from all directions on the days of the battle? Critical information was noted and sent out, but the decisions affecting that information, which sometimes might have been in shorthand conversations, was not recorded. So, as the old saying goes, we don’t know what we don’t know. Still, you have to work with the information that is available. Not only were the rich records of the OR (and other collections) indispensable to my research, but the signal fact that Mrs. Margaretta (“Margaret”) Meade saved all (or at least we think all) of her husband’s wartime letters, is a godsend to historians. Meade wrote to his wife nearly every day in the war, and if a historian can read the unedited letters found in the Historical Society of Pennsylvania, an unvarnished view of a complicated man emerges. What we do not have are her daily letters to him, which would have opened up brand new insights into their lives. Just by reading Meade’s responses to his wife’s questions you can tell that she is a shrewd observer of people and politics.

JSG: Meade was a team player. He got along with most of his fellow generals in the Army of the Potomac, and his competency and executive abilities were noted by his superiors and peers. Furthermore, though he enjoyed hearing Army gossip as much as the next officer, he was not constantly politicking, nor publicly proclaiming his views on the war. Some of his predecessors did both. In fact, one of his pluses, according to Lincoln and Stanton, was that he was largely apolitical (which I argue was simultaneously one of his great weaknesses). As commander of the Army of the Potomac he got dragged into politics several times, but when that happened, he was quickly admonished by Halleck, and then he retreated back to his apolitical shell. Meade was an Army man, through and through. By that I mean he believed in the chain of command, and acted within it. He never challenged his superiors in a public manner, nor did he work political channels behinds their back. He also gave great loyalty to the generals who served under him, especially those he had promoted. His executive skills were widely acknowledged, and no one would ever accuse him of lack of preparation and planning. By and large he was not a risk taker, which pleased some, and disappointed others. He also had considerable “people skills” and a good sense of survival. Who else would have been able to swallow his ego enough to work side-by-side with his boss for 13 months during some of the most horrific months of the war, never losing command of his army though many in Grant’s circle wanted him gone? Even though he was unhappy during most of those months, feeling stifled and unappreciated, he knew that the alternative—exile to a non-command in his home state—would be an even worse fate. So he kept his mouth shut (except in letters to his wife and friends), and did his job.

The Interview continues at H-Net

Posted by Rea Andrew Redd at 10:53 AM No comments: