On Lincoln’s first visit, in 1860, he stopped to have his picture, now indelible, taken by the photographer Mathew Brady. Less well known is that, on his 1861 trip, the other great New York image-maker of the time, the cartoonist Thomas Nast, saw him, too—for the first time—and made a series of drawings that are startling in their intimacy and alert observational power. The series has been known by scholarly rumor, but recently, tucked among the sketches in a Civil War notebook, two small images that Nast made of Lincoln’s face have been uncovered for the first time. This discovery we owe to the historian Ted Widmer, who came upon them in the archives of Brown University.


“I’ve been working on a book about that train trip from Springfield to Washington,” Widmer, who worked as a speechwriter in the Clinton White House, explained the other morning. “Presidents had never been as exciting to people before as Lincoln was at this moment. He was performing his part—the part of the President-to-be, and even the part of the savior of his country. He started off with a couple of so-so speeches, but he got his game going and was giving great speeches by the time he got to New York.”

Searching for material at Brown—which has an exceptional Lincoln archive, including the collection of John Hay, Lincoln’s secretary—Widmer came upon a Civil War notebook with sketches in it ascribed to Nast. Turning the pages, he found a series showing Lincoln arriving at 30th Street train station, the precursor to New York’s Penn Station. Nast, only twenty, was already drawing regularly for Harper’s Weekly and other papers (although his first cartoon of Santa Claus, whose now iconic shape and beard were largely Nast’s invention, was about a year off).
“Nast was waiting in the train station in New York. He made all these drawings of the big crowd waiting for the train—and then you see Lincoln in his top hat, coming through! And in the middle were the two unknown sketches that I went crazy about: one is a pretty good side view—Nast got up close to Lincoln. There was another piece of paper Scotch Taped to the back of the page, and I was overcome with curiosity and looked on the back side, and there it was, this incredible frontal sketch of Lincoln’s face. Sixty seconds of looking, I suppose, but so strong.”

One of the striking things about the drawings is the exceptionally free and vivid shorthand with which they’re done, and the informality of their approach. Nast was still working largely in a finished, ceremonial vein common to cartoonists of the period. Most of the images he went on to draw of Lincoln were of that kind; one, an allegorical vision of a “false peace” between North and South, was widely credited with helping Lincoln get reëlected. But, in these 1861 sketches, we see Nast’s mastery of the living thing, the face seized from life, which gives tensile strength to his more elaborate tableaux.

The other striking aspect of the sketches is the beard, which Lincoln had grown a year earlier. “The beard is endlessly fascinating,” Widmer said. “It’s true that a young girl did write to Lincoln suggesting that he grow one—that’s the old story. But the historian Adam Goodheart has a theory that the beard was a kind of rebellion against the crappiness of the compromising politicians of the preceding period, Buchanan and the rest, which was exemplified in the starchy way they dressed—a professional way of looking. Lincoln wanted to look Western, with a soft collar and a beard. Almost like Whitman—forging his own identity. I also have a theory that he may have been inspired by the great Hungarian liberal leader Lajos Kossuth, whom he keenly admired.”

Widmer has returned to the sketches often. “He looks so strong in these drawings—like a real force of nature, coming at the darkest moment to save the country, and even global democracy. With all its imperfections, the United States was still the largest democracy. If we didn’t make it, democracy didn’t. That was his point. And you see its outer surface here.

Full Text Source: The New Yorker
Posted by Rea Andrew Redd at 10:11 AM No comments:

Wondering: Did Abraham Lincoln Have a Will? 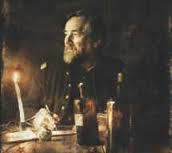 Wondering:  Did Abraham Lincoln have a will?

. . .  did our 16th president have a plan for his money after death? The answer is no; Abraham Lincoln died intestate, meaning without a will. These days, any major figure of state is certain to have a proper will, but in Lincoln's day, this was not so common. So what happened?

By noon the day Lincoln died, his oldest son, Robert, had sent a telegram to Justice David Davis of the United States Supreme Court asking him to get at once to Washington in to take change of his father's affairs. Mrs. Lincoln and Robert then penned a letter to the county court in their home state of Illinois to recognize Davis as the administrator of Lincoln's estate.

In the end, there was over $110,000 to be divided from the estate. Justice Davis did not take any payment, and had handled the estate administration entirely on his own, without even hiring an attorney. With record-keeping as common to the time and the devotion to the late president, much is known about his estate. For example, Lincoln's unpaid debts only totaled $38.31 at his death -- far less than most could imagine in today's age, even with inflation.
Bearing in mind that Davis was a Supreme Court Justice, it is no surprise that he was able to manage it on his own. Estate administration is not a simple process, and typically, the person charged with it hires and attorney. An experienced attorney can be an irreplaceable resource for families and individuals in need of estate planning or administration.

Text Found at Berman and Aspell, LLP
Image:  Civil War Librarian
Posted by Rea Andrew Redd at 9:53 AM No comments: