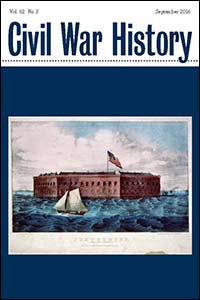 Civil War History is the oldest continuously in print scholarly journal  which is focused on the American Civil War. In issue 62:3  you will find:

Did the Tug Have to Come?  A Critique of the New Revisionism of the Secession Winter   by: James L. Huston
Several historians have made the case that the actions of Abraham Lincoln and antislavery Republicans brought on the Civil War because of a refusal to compromise on the issue of slavery’s expansion.  This interpretation has questionable foundations.  The new revisionists do not consider the problems surrounding the act of separate state secession; southerners had a multitude of warnings that northerners did not accept secession without the consent of the other states.  The revisionists claim that a compromise in 1860-1861 could have avoided the loss of four border slave states to the Cotton Confederacy, but fail to acknowledge that the same conditions that produced secession then could have produced secession later.  The new revisionists also maintain that Jefferson Davis and his cabinet had no recourse but to fire on Fort Sumter when Lincoln attempted provisioning; they omit the other options that the Confederate leaders did not even consider.  Finally, the new revisionists have an over-reliance on contingency and fail to weigh the forces bringing about separation and war.

Public Necessity or Military Convenience?  Reevaluating Lincoln’s Suspensions of the Writ of Habeas Corpus during the Civil War   by: Robert O. Faith
Few historians have explored subsequent habeas cases during the crucial period leading up to the Habeas Corpus Act of 1863, in which Congress finally sanctioned Lincoln’s earlier suspensions of habeas corpus nearly two years after his initial suspension, of April 27, 1861.  This article uses other high-profile cases to reveal a pattern in which military arrests under Lincoln occurred as a matter of routine military convenience rather than public necessity.  All of these cases involved the interference of at least one member of the Lincoln administration in areas often far removed form the battlefield, prompting observers in both the United States and England, as well as modern historians, to question the necessity of certain military arrests and consider the practical consequences of executive suspension on civil liberties during the nation’s greatest trial.

A Civil War Hermaphrodite   by:  Jonathan W. White
This primary source exploration pertains to the life of Ellen/Edgar Burnham, a striking northern woman who transitioned to a male identity in the midst of the Civil War.  Through an examination of a letter in the records of the Adjutant General’s Office, combined with a deeper research into various newspapers, White sheds light on a story widely reported in the newspapers but absent in the larger scope of the cultural history of the Civil War.

along with book reviews of the newest offering by James B. McPherson, and recent works on William T Sherman, Southern civilian women in the path of Sherman's armies, the military campaigns of April 1865, Union veterans, the natural environment during the Civil War and other topics.