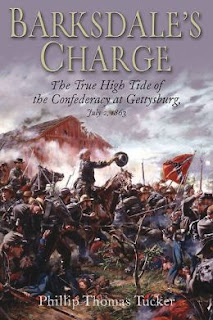 In truth, Gettysburg was decided not on the famous third day of the battle, but on the previous after-noon…. [T]he charge of General William Barksdale and his 1,600-man Mississippi Brigade … came closer to toppling the Army of the Potomac than any other Rebel offensive effort of the war…. [I]n one of the great inequities of American history, Barksdale’s Charge has long remained in the shadow of “Pickett’s Charge,” thanks largely to the dominance of the Virginia School of history. (1, 3)
....
Tucker indicts Longstreet and Lee for not supporting Barksdale’s troops. “Longstreet, who had never wanted to launch the tactical offensive this afternoon, was not only more pessimistic but out-right defeatist. He ordered no troops to follow up behind Barksdale” (176). Lee’s overconfidence in his corps commanders compounded the problem, since he “failed to closely supervise and manage the offensive effort, especially in supporting Barksdale’s dramatic breakthrough…. Lee possessed no strategic reserve to follow-up [sic] on Barksdale’s success, or any other that might be achieved that day” (176). By contrast, Meade and his artillery chief Henry Hunt made good use of their reserves during the Second Corps’ retreat up Cemetery Ridge. “Unfortunately for the Mississippi Brigade, the Army of the Potomac … benefited from the availability of a powerful artillery reserve, unlike Lee’s Army, which had made the fatal error of abolishing its artillery reserve corps just before invading the North” (213).
....
Barksdale’s Charge tells a tale of immense valor at the brigade level frustrated by the ill-coordinated tactical decisions of division and corps commanders: “while the army’s commander and his top lieutenant had been badly outgeneraled on July 2, the Mississippi Brigade had not been out-fought by any unit on either side” (244). Hood wrote after the war, “Thus it was that the 21st Mississippi Regiment bore the Stars and Bars to the very farthest point reached in the enemy’s line on the bloody field of Gettysburg” (243). Meade wrote in his after-battle report that “Sickles’ unauthorized advance to the Peach Orchard was ‘an error which nearly proved fatal in the battle’” (259). Phillip Tucker has demonstrated in detail the truth of these judgments.
The entire book review is at:   Michigan War Studies Review, July 1, 2016
Posted by Rea Andrew Redd at 9:11 AM 1 comment:

Rehabbing Cemetery Ridge, The Fields of Gettysburg Weblog, May 21, 2015

Construction is beginning in mid-July 2016 on $1.5 million dollar project to rehabilitate Cemetery Ridge at Gettysburg National Military Park.  The nonprofit Gettysburg Foundation  will provide a grant of $900,000 to match National Park Service funding of $600,000 for this stewardship project.

Then and Now: The 1923 Hancock Avenue gateway at Taneytown Road

The Hancock Avenue entrance gates that were built in 1923 will be rebuilt .  There were earlier gates of different designs.  In 1882, the Gettysburg Battlefield Memorial Association created an opening in the stone wall on the west side of Taneytown Road for access to Hancock Avenue.  The first version, in 1889, was a wood and wire gate.  A later version, in 1896, included iron fencing (see photo) from the original fence that had surrounded Lafayette Square Park in Washington, D.C. – the same iron fencing that now forms the boundary between Evergreen Cemetery and the Soldiers’ National Cemetery. The park’s monument specialists have the majority of the historic stones need to rebuild the 1923 gateway. The 1896 version of the Hancock Avenue gate at Taneytown Road used pieces of the old Lafayette Square fence from Washington, D.C. which is closely associated with Daniel Sickles.

During Pickett’s Charge, the left flank of General Pettigrew’s division engaged Union forces in Ziegler’s Grove.  Because Battery I, 1st U.S. Artillery was located in Ziegler’s Grove it was heavily shelled during the pre-assault bombardment, inflicting numerous casualties on the battery’s infantry support, the 108th New York, and other nearby infantry units. This project will allow us to replant the missing portion of Ziegler’s Grove.  We plan to plant approximately 125 trees including Black Cherry, Shagbark Hickory, Black Gum, White Oak, Red Oak, Tulip Poplar and Honey Locust.

Documentation for reestablishing this ravine comes from a number of sources, including a grading plan in the National Park Service files showing the area before the Cyclorama building parking lot was developed. In addition, archaeology helped establish the exact location of a portion of the original Hancock Avenue during testing completed by the park when we replaced a water line extension in 2006.

Looking toward the National Cemetery along the old commemorative walkway, the photograph shows the dip known as Ziegler's Ravine.  Hancock Avenue cuts across the far side of the ravine. The 88th Pennsylvania Marker, in its original location, is on the left.  The profile of Ziegler's Ravine will be especially noticeable to those driving on Hancock Avenue as the road will proceed down a dramatic dip and then come back up for an approximately six foot change in elevation. The NPS will also rebuild some stone walls near Hancock Avenue and along commemorative walkway that was surfaced with crushed stone.

This posted has been edited from the Text Source: From The Fields of Gettysburg

Posted by Rea Andrew Redd at 10:25 AM No comments: