The authors offer a clear and concise presentation of Richmond's various histories; such as Richmond before 1861. This discussion includes its founding, commerce, and population in the context of it's being as a state capital in which cotton was king and slave sales occurred. Not neglected is the African American community and citizens who opposed slavery,

The authors' offer the city's 1861-1864 history regarding  Virginia's secession, the choice of the Confederacy's national capital, manufacturing and railroad center, as well as a discussion of its newspapers, Unionist sentiments and spies, along with the impact of the Seven Days Battles upon the city.

Both of these sections are presented in about 145 pages. A third topic, Richmond in Decline, 1864-1865 is adequately presented in about 45 pages. Overall, the maps, charts and photographs/illustrations add significantly to the reader's enjoyment of this splendid offer from History Press.

Few American cities have experienced the trauma of wartime destruction. As the capital of the new Confederate States of America, situated only ninety miles from the enemy capital at Washington, D.C., Richmond was under constant threat. The civilian population suffered not only shortage and hardship but also constant anxiety. During the war, the city more than doubled in population and became the industrial center of a prolonged and costly war effort. The city transformed with the creation of a massive hospital system, military training camps, new industries and shifting social roles for everyone, including women and African Americans. Local historians Jack Trammell and Guy Terrell detail the excitement, and eventually bitter disappointment, of Richmond at war.

Posted by Rea Andrew Redd at 12:21 PM No comments:

Posted by Rea Andrew Redd at 9:41 AM No comments:

Notable and Forthcoming: Meade at Gettysburg, A Study In Command 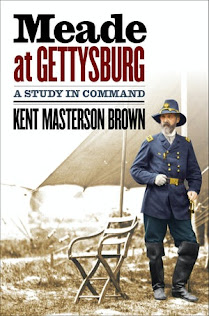 Meade At Gettysburg: A Study in Command, Kent Masterson Brown, Esquire, University of North Carolina Press, 488 pp., 70 illustrations, 13 maps, bibliographic notes, index, June 2021, $ 35.00.
Although he took command of the Army of the Potomac only three days before the first shots were fired at Gettysburg, Union general George G. Meade guided his forces to victory in the Civil War's most pivotal battle. Commentators often dismiss Meade when discussing the great leaders of the Civil War.
But in this long-anticipated book, Kent Masterson Brown draws on an expansive archive to reappraise Meade's leadership during the Battle of Gettysburg. Using Meade's published and unpublished papers alongside diaries, letters, and memoirs of fellow officers and enlisted men, Brown highlights how Meade's rapid advance of the army to Gettysburg on July 1, his tactical control and coordination of the army in the desperate fighting on July 2, and his determination to hold his positions on July 3 insured victory.
Brown argues that supply deficiencies, brought about by the army's unexpected need to advance to Gettysburg, were crippling. In spite of that, Meade pursued Lee's retreating army rapidly, and his decision not to blindly attack Lee's formidable defenses near Williamsport on July 13 was entirely correct in spite of subsequent harsh criticism.
Combining compelling narrative with incisive analysis, this finely rendered work of military history deepens our understanding of the Army of the Potomac as well as the machinations of the Gettysburg Campaign, restoring Meade to his rightful place in the Gettysburg.
Kent Masterson Brown an award-winning writer, filmmaker, and attorney residing in Lexington, Kentucky. His previous books include Retreat from Gettysburg: Lee, Logistics, and the Pennsylvania Campaign.
Text Source: University of North Carolina Press Press

Posted by Rea Andrew Redd at 11:56 AM No comments:

Partisan activities of disloyal women and the Union army’s reaction

During the American Civil War, more than four hundred women were arrested and imprisoned by the Union Army in the St. Louis area. The majority of these women were fully aware of the political nature of their actions and had made conscious decisions to assist Confederate soldiers in armed rebellion against the U.S. government. Their crimes included offering aid to Confederate soldiers, smuggling, spying, sabotaging, and, rarely, serving in the Confederate army. Historian Thomas F. Curran’s extensive research highlights for the first time the female Confederate prisoners in the St. Louis area, and his thoughtful analysis shows how their activities affected Federal military policy.

Early in the war, Union officials felt reluctant to arrest women and waited to do so until their conduct could no longer be tolerated. The war progressed, the women’s disloyal activities escalated, and Federal response grew stronger. Some Confederate partisan women were banished to the South, while others were held at Alton Military Prison and other sites. The guerilla war in Missouri resulted in more arrests of women, and the task of incarcerating them became more complicated.

The women’s offenses were seen as treasonous by the Federal government. By determining that women—who were excluded from the politics of the male public sphere—were capable of treason, Federal authorities implicitly acknowledged that women acted in ways that had serious political meaning. Nearly six decades before U.S. women had the right to vote, Federal officials who dealt with Confederate partisan women routinely referred to them as citizens. Federal officials created a policy that conferred on female citizens the same obligations male citizens had during time of war and rebellion, and they prosecuted disloyal women in the same way they did disloyal men.

The women arrested in the St. Louis area are only a fraction of the total number of female southern partisans who found ways to advance the Confederate military cause. More significant than their numbers, however, is what the fragmentary records of these women reveal about the activities that led to their arrests, the reactions women partisans evoked from the Federal authorities who confronted them, the impact that women’s partisan activities had on Federal military policy and military prisons, and how these women’s experiences were subsumed to comport with a Lost Cause myth—the need for valorous men to safeguard the homes of defenseless women.

May Be One Of A Kind? 1864 Union Regimental Poll Book 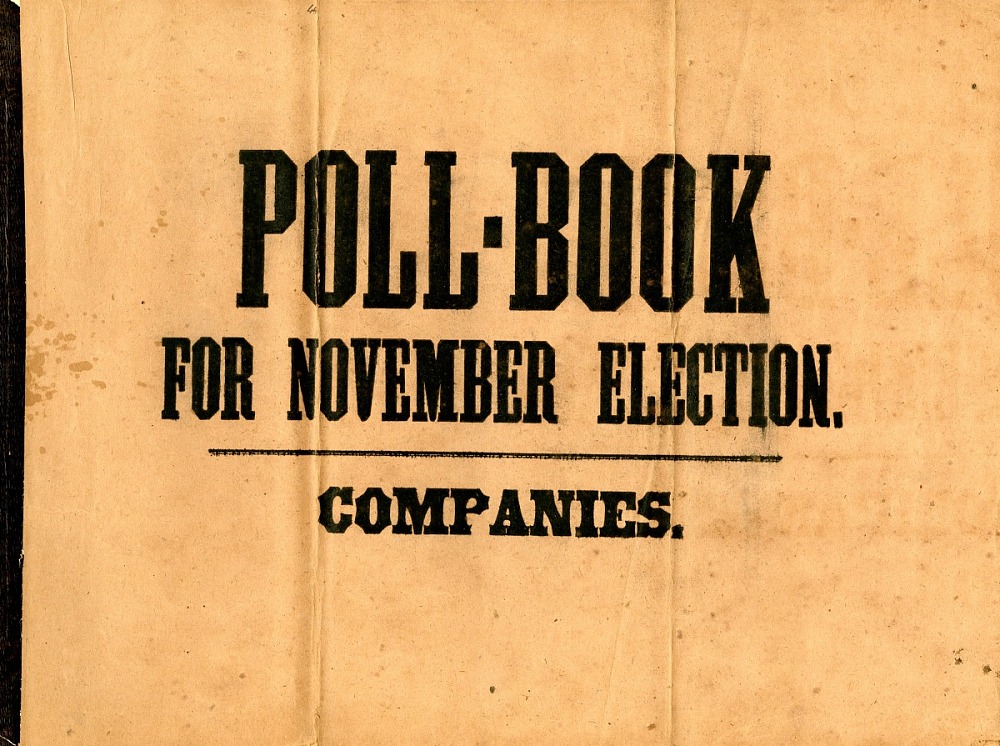 Posted by Rea Andrew Redd at 1:58 PM No comments:

Lincoln: A Life In The Natural Environment

Lincoln's life occurred during an era of transition from when most individuals were farmers who lived in relatively new states to a time when metropolitan regions and webs of commerce began to dominate the natural environment. During the early decades of Lincoln's life water powered then steam powered mills began to produce clothing, farm tools and machines, and domestic  goods. The first half of the 1800s most citizens lived on farms and in small communities. By mid-century, farmers and industrial workers had both come to dominate the interactions of the economy with the natural environment.

On the eve of the Civil War, more than 70 percent of Americans lived on farms or in small farm towns, and agriculture was the nation's largest and fastest-growing business.

Posted by Rea Andrew Redd at 1:57 PM No comments:

Prisoners of War: Handwritten Newspaper By Confederates Held in Delaware 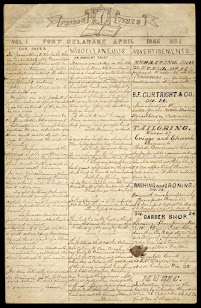 Confederate prisoners of war confined at Fort Delaware produced this newspaper by hand in 1865. The  New York Historical Society holds one of four surviving copies, each of which was likely passed around and read by multiple prisoners. The paper numbers four pages in total.

Like camps holding Union prisoners in the South, Fort Delaware, located on the Delaware River, was not a pleasant place. More than 40,000 Confederate prisoners of war cycled through the brick-walled prison between 1862 and 1865. Overcrowding, poor handling of sanitation, and short rations resulted in the deaths of many prisoners. Astonishingly, 56,000 men fighting on both sides died while imprisoned during the conflict. The paper numbers four pages in total.

Despite these conditions, the men at Fort Delaware evolved an informal economy, staged entertainments, and formed clubs. This newspaper was mostly concerned with covering these aspects of the prison experience. In their introductory column, the editors of the paper warn the reader that “nothing political will be indulged in” and promise instead to promote “public improvements, the Fine Arts, and Advancement of Literature.”

The “ancient toast” printed in the central column refers to “the old chivalric time.” Southerners before and after the Civil War were particularly intrigued by chivalry, knighthood, and the literature of Sire Walter Scott and this offering reflects that taste.  The newspaper also carries paid advertisements for barbershops, “washing and ironing,” dental services, and music instruction. If the first issue is any indication, the editors had no problem finding prisoners willing to underwrite this venture with their advertising dollars.

In The Civil War in 50 Objects, historian Harold Holzer wrote about this newspaper and  surmises that this edition of the Prison Times was probably one of very few produced. Vol. 1, No. 1 was “printed” the same month that the war ended.

Posted by Rea Andrew Redd at 1:56 PM No comments: