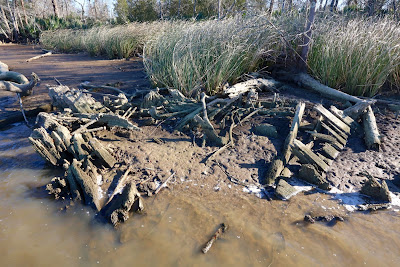 Relying on historical records and accounts from old timers, AL.com may have located the long-lost wreck of the Clotilda, the last slave ship to bring human cargo to the United States.

What's left of the ship lies partially buried in mud alongside an island in the lower Mobile-Tensaw Delta, a few miles north of the city of Mobile. The hull is tipped to the port side, which appears almost completely buried in mud. The entire length of the starboard side, however, is almost fully exposed. The wreck, which is normally underwater, was exposed during extreme low tides brought on by the same weather system that brought the "Bomb Cyclone" to the Eastern Seaboard. Low tide around Mobile was about two and a half feet below normal thanks to north winds that blew for days.
"I'm quaking with excitement. This would be a story of world historical significance, if this is the Clotilda," said John Sledge, a senior historian with Mobile Historical Commission, and author of The Mobile River, an exhaustive history of the river. "It's certainly in the right vicinity... We always knew it should be right around there."

This reporter, Ben Raines, used the abnormally low tides to search for the ship after researching possible locations. The remote spot where the ship was found, deep in the swampy Mobile-Tensaw Delta, is accessible only by boat. During my first trips after discovering the wreck, I documented it with photographs and aerials shot with a drone. Over the next week, I ferried a shipwright expert in the construction techniques used on old wooden vessels and a team of archaeologists from the University of West Florida to the site.

All concluded that the wreck dated to the mid 1800s (the Clotilda was built in 1855), and featured construction techniques typical of Gulf Coast schooners used to haul lumber and other heavy cargo, as the Clotilda was designed to do. The vessel also bore telltale signs of being burned, as the Clotilda reportedly was. In later years, the slavers bragged of burning the ship at the conclusion of their voyage in July of 1860 in an effort to hide proof of their human trafficking. Evidence of a fire on the wreck included a distinctive patina on wrought iron chain plates used to hold the masts and bowsprit in place, and charred beams and timbers in the ship's interior.

"These ships were the 18-wheelers of their day. They were designed to haul a huge amount of cargo in relatively shallow water," said Winthrop Turner, a shipwright specializing in wooden vessels. "That's why you see the exceptional number of big iron drifts used to hold the planking together. That's also why the sides of the ship are so stout. They are almost two feet thick. The construction techniques here, no threaded bolts, iron drifts, butt jointed planking, these all confirm a ship built between 1850 and 1880."

Full Text and Video at Alabama.com
Posted by Rea Andrew Redd at 9:10 AM No comments:

New and Noteworthy: The Minds of the Soldiers

Lande states that his "personal experiences in forensic psychiatry and addiction medicine have contributed insights that collectively informed my analysis of the social forces shaping America's postwar period." With an audience of general readers in mind, he uses a fluid writing style, short, punchy paragraphs, and extended narration. He takes little notice of previous scholarship on his subject, but promises a work different in "scope and analysis" from that of "many other eminent historians" (2). In the absence of any specific mention of those historians in his main text, readers are left to wonder just what makes his account distinctive.

The book comprises a preface and seven thematically organized chapters. Lande moves briskly from event to event and person to person, guided by a central theme that carries across several fronts. Chapter 1, "Sadness and Suicide," for example, describes how wartime homesickness morphed into debilitating nostalgia and a concomitant "rash of suicides" (34). Chapter 4, "Intemperance," concerns the spike in postwar alcoholism, while 5, "Carnival of Crime," explains how "Depression-driven dissipation" (151) drove up crime rates. The author maintains that "The riveting impact of a war now concluded left society rudderless, drifting toward a reflective introversion and anomie. Against this backdrop, brooding intensified, cynicism increased, and social outlets dried up. For an increasing number of individuals, the nihilistic spiral ended in suicide" (29).

This is not an argument-driven work but rather a broad investigation of a pervasive American postwar social malaise: "Emotional turmoil from four years of civil war contributed to decades of mayhem, misery, and malevolence on a scale unprecedented in America's short history" (193). To bolster such assertions, Lande canvasses census data, newspaper articles, personal correspondence, medical journals, and popular periodicals. While the resulting study contains interesting stories and makes some solid claims, it also postulates several tenuous connections between the Civil War and postwar upheaval. Chapter 4, for example, adduces census data showing that higher mortality rates in postbellum America were attributable to "venereal diseases, alcoholism, … diseases of the liver, … accidents of all kinds, and suicides" (100). Yet, as Lande himself notes, "the full impact of intemperance during the Civil War and in the following decades is nearly impossible" (99) to assess.
In this case, the inferred causal link between wartime and postwar alcohol abuse and higher death rates is entirely plausible. Lande's treatment of spiritualism in chapter 2, "A Loss of Faith," is less compelling. It dwells so long on antebellum-era spiritualism and famous practitioners like the Fox family and Cora Hatch as to overshadow the author's stated aim to show how the Civil War created "fertile ground for the rapid growth of Spiritualism" (39). Lande concedes that, though the war produced many easily preyed-upon "disillusioned victims" (75), "only skimpy evidence documenting Civil War soldiers' feelings about Spiritualism seems to exist" (59). Presenting a string of incidents and stories, however fascinating, does not effectively explain how the war changed Americans' spiritual thinking, a subject well elucidated by others.

Finally, certain claims suffer from lack evidence or ignorance of relevant scholarship. For example, Lande uses Gen. Ulysses S. Grant in his discussion of intemperance. Grant famously developed a drinking problem during his antebellum military service and the press often criticized him for drunkenness, correctly or not, during the war. Relying on a nineteenth-century biography, Lande describes Grant as too drunk to participate in the battle of Shiloh (6–7 April 1862), in order to set up his narrative of the general's conquest of his intemperance later in the war (113). In fact, Grant spent the night of the sixth with his troops in the field and personally coordinated the counterassaults that routed the Confederate forces the next day.

The gripping, often troubling tales told in Psychological Consequences of the American Civil War shed welcome light on the effects of the "furious forces unleashed by four years of war" (10) long after Appomattox. R. Gregory Lande's lively investigation of the world created by the Civil War will intrigue and instruct a wide general audience, if not specialist readers.