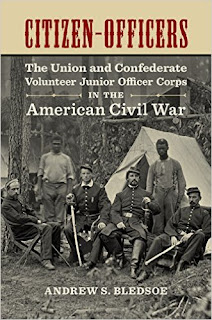 From the Publisher:  From the time of the American Revolution, most junior officers in the American military attained their positions through election by the volunteer soldiers in their company, a tradition that reflected commitment to democracy even in times of war. By the outset of the Civil War, citizen-officers had fallen under sharp criticism from career military leaders who decried their lack of discipline and efficiency in battle. Andrew S. Bledsoe’s Citizen­-Officers explores the role of the volunteer officer corps during the Civil War and the unique leadership challenges they faced when military necessity clashed with the antebellum democratic values of volunteer soldiers.

Bledsoe’s innovative evaluation of the lives and experiences of nearly 2,600 Union and Confederate company-grade junior officers from every theater of operations across four years of war reveals the intense pressures placed on these young leaders. Despite their inexperience and sometimes haphazard training in formal military maneuvers and leadership, citizen-officers frequently faced their first battles already in command of a company. These intense and costly encounters forced the independent, civic-minded volunteer soldiers to recognize the need for military hierarchy and to accept their place within it. Thus concepts of American citizenship, republican traditions in American life, and the brutality of combat shaped, and were in turn shaped by, the attitudes and actions of citizen-officers.

Through an analysis of wartime writings, post-war reminiscences, company and regimental papers, census records, and demographic data, Citizen­-Officers illuminates the centrality of the volunteer officer to the Civil War and to evolving narratives of American identity and military service.

"Citizen-Officers fills a major gap in the literature on the American Civil War. It offers perceptive analysis of volunteers who filled junior ranks among officers in both the Union and Confederate armies... [C]areful attention to the republican example of disinterested service, the transition from civilian to military cultures, the impact of combat, and change over time, among other virtues, lends distinction to this book." -Gary W. Gallagher, author of The Union War and John L. Nau III Professor in the History of the American Civil War, the University of Virginia

"As Andrew Bledsoe shows in his exceptional Citizen-Officers, managing civilian soldiers who were fiercely resistant to military rule required intelligent and inspired leadership. There were plenty of martinets and incompetents who were despised by the troops, but in time they were cast aside. The vast majority of lieutenants and captains matured on the job, employing a tough pragmatism that helped transform unruly volunteers into disciplined killers.Citizen-Officers is an essential book that deserves a place alongside the classic soldier studies by James McPherson and Joseph Glatthaar." -Peter S. Carmichael, author of The Last Generation: Young Virginians in Peace, War, and Reunion and director of the Civil War Institute, Gettysburg College

"...Bledsoe provides a nuanced and insightful analysis of the overlooked but essential aspect of junior officers in Civil War armies. His study teaches us a great deal about how Civil War armies worked. It also addresses a fundamental question about nineteenth-century conflicts-building responsive volunteer militaries from a democratic citizenry that rejected natural leadership and the aristocratic pretensions of the Old World. Bledsoe persuasively shows how an adaptable and creative cadre of men, pulled from civilian life, matured into effective leaders, and, in the process, how democratic nations create and sustain popular wars." -Aaron Sheehan-Dean, author of Why Confederates Fought: Family and Nation in Civil War Virginia and Fred C. Frey Professor, Louisiana State University

Forthcoming---The Free State of Jones County, Mississippi: Its History and Its Hollywood Treatment 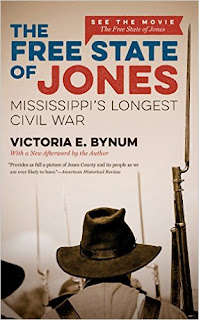 This May, STX Entertainment will release the film Free State of Jones, which tells the story of the Knight Company and the Jones County rebellion, a Civil War history first told by Victoria Bynum in her 2001 book The Free State of Jones. A few weeks ago, Bynum and I discussed her experiences working as a consultant on the film, and seeing her book come alive on the screen.

MKN: Did you know at the time you were writing “The Free State of Jones” that it had cinematic potential? And what is it about this story that makes it compelling for filmmakers?

VB: As I researched and wrote The Free State of Jones, I grew increasingly aware of its historical importance as an insurrection that combined elements of class, race, gender, and kinship that, for this story, had long been underestimated, misunderstood, distorted, or simply ignored.

Although I did not write the book with a movie in mind, the story’s vivid real-life characters, its oral and written first-hand accounts of fierce confrontations between Confederates and deserters, the interracial romance between the band’s leader, Newt Knight, and his slave accomplice, Rachel Knight, and the Unionist core of the band itself, convinced me of the story’s cinematic potential.
On the standard author’s questionnaire that I completed for the University of North Ca
rolina Press, I advised the press to consider presenting the book “to television and film companies as a potential docudrama or miniseries.” At that point, however, I did not anticipate Hollywood’s interest in the story.

MKN: As the process of transforming the book into the film got underway, what was it like to experience the subjects and arguments in your book morphing into a visual format?

VB: When I visited the movie set in Louisiana, I watched actor Matthew McConaughey recreate Newt Knight’s pivotal experiences at the battle of Corinth. I was pleased at the manner in which Gary Ross, director and author of the movie’s screenplay, targeted the beginning stage of Newt’s evolution into a class-conscious opponent of the Confederacy, and I was impressed by McConaughey’s ability to immerse himself in the role, both physically and psychologically.

I’ve since viewed the movie’s trailer, and was likewise impressed with the way in which class issues, front-line participation by women, and collaboration between deserters and slaves in this home front insurrection came to life on the screen.

I’ve not yet seen the entire movie, so can’t comment on the completed product. Based on what I have seen, I’m hopeful that the movie captures the essential elements of defiance and struggle that drew me to the story.

MKN: Was there anything that worried you, or surprised you about that process?


VB: Like most historians, I worried about the movie’s factual accuracy. Over time, my thinking has evolved on the creative differences between an academic work of history and a historically-based movie. Both rely on imagination, but in very different ways. Historians don’t merely assemble facts, apropos the cliché, “let the facts speak for themselves.” We must use imagination as well as intellect to assign the elusive truth of meaning to our work, or we risk producing little more than a footnoted list of facts.

In contrast to historians, Hollywood moviemakers use imagination to recreate a historic event that can be viewed within the space of 2-3 hours. The larger truth of an event is typically delivered without perfect adherence to facts—but rather with invented dialogue, composite characters and compressed events—to tell a true story that informs, inspires and entertains. My expectation is that the movie and my book will mutually reinforce the larger truth of about the Free State of Jones. 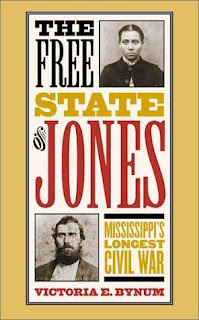 VB: Actually, I first learned in 2005 that plans for a movie based on the history of the Free State of Jones were underway. As is often the case in Hollywood, the journey to production was a slow one.


MKN: How do you hope the film will shape Americans’ understanding of Civil War history?

VB: Most Americans know little to nothing about landowning, nonslaveholding white Southerners of the antebellum and Civil War South, which in turn prevents them from fully understanding the average Southerner’s experience of the Civil War. In bringing the story of the Free State of Jones to the masses, not only is the image of a white Solid South negated, so also is the agency of Southern dissenters during the era of the Civil War and Reconstruction asserted. This represents an important shift in the general manner in which Hollywood has presented the Civil War.

MKN: What advice do you have for historians writing with an eye toward film adaptation, or working as consultants on films about history?

VB: Since I did not write The Free State of Jones with such an eye, my remarks are speculative. I’ve heard it said that authors who intend to pitch their work to film companies should retain the intellectual rights to their manuscripts (which, in academia, are generally held by the press). I suppose one would consider hiring a literary agent, as well.

In the aftermath of having the rights to my book purchased by a Hollywood studio, however, I have benefited from the University of North Carolina Press’s commitment to publishing a new edition of the book and marketing it internationally.

I have no specific advice in regard to finding work as a film consultant. I was asked to be a consultant for The Free State of Jones movie on the basis of my book of the same name. Several other historians were hired as consultants based on their works on related historical topics.