Forthcoming---A Vast Sea of Misery: The Classic To Be Reissued 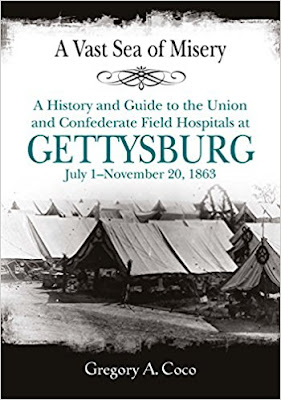 Nearly 26,000 men were wounded in the three-day battle of Gettysburg (July 1-3, 1863). It didn't matter if the soldier wore blue or gray or was an officer or enlisted man, for bullets, shell fragments, bayonets, and swords made no class or sectional distinction. Almost 21,000 of the wounded were left behind by the two armies in and around the small town of 2,400 civilians.

Most ended up being treated in makeshift medical facilities overwhelmed by the flood of injured. Many of these and their valiant efforts are covered in Greg Coco's A Vast Sea of Misery: A History and Guide to the Union and Confederate Field Hospitals at Gettysburg, July 1-November 20, 1863.

The battle to save the wounded was nearly as terrible as the battle that placed them in such a perilous position. Once the fighting ended, the maimed and suffering warriors could be found in churches, public buildings, private homes, farmhouses, barns, and outbuildings.

Thousands more, unreachable or unable to be moved remained in the open, subject to the uncertain whims of the July elements. As one surgeon unhappily recalled, "No written nor expressed language could ever picture the field of Gettysburg! Blood! blood! And tattered flesh! Shattered bones and mangled forms almost without the semblance of human beings!"

Based upon years of firsthand research, Coco's A Vast Sea of Misery introduces readers to 160 of those frightful places called field hospitals. It is a sad journey you will never forget, and you won't feel quite the same about Gettysburg once you finish reading.

CWL: The first published in 1988 by Thomas Publications [Gettysburg, Pennsylvania], A Vast Sea of Misery is 30 years old.  Coco's work on this and related fields began something new. Firm in in his  scholarship and relying upon soldiers' recollections and letters,  Coco then integrated farmers' damage claims to both the Federal and Pennsylvania governments into the Battle of Gettysburg narrative.   A Vast Sea of Misery also opened up the study of the borough and its civilians, religion and the volunteerism which occurred after the battle. CWL has two copies, one hardback and paperback; the former near mint the latter thoroughly marked with notes. Savas Beatie is congratulated for keeping  A Vast Sea of Misery in print.
Posted by Rea Andrew Redd at 10:20 AM No comments:

A new online archive of Civil War correspondence promises to shed light on historical varieties of nonstandard American English. Two linguists, Michael Ellis (Missouri State University) and Michael Montgomery (University of South Carolina), have teamed up with historian Stephen Berry (University of Georgia) to create Private Voices  an archive of letters from Civil War soldiers. Based on correspondence collected by Ellis and Montgomery as part of the Corpus of American Civil War Letters the Private Voices archive focuses on the writing of soldiers who were “untrained in spelling, punctuation, or the use of capital letters,” according to the press release announcing the launch of the site.

Soon after news of the archive  was shared on the American Dialect Society mailing list, Jonathan Lighter (author of the Historical Dictionary of American Slang) began looking for hidden treasures. He swiftly turned up a letter from 1862  in which the author, an infantryman from Virginia, appears to express a violent sentiment: “I want to kick ass.”

The writer was John B. Gregory of Pittsylvania County, Virginia, serving in Company B of the 38th Virginia Infantry. His letter is dated Feb. 17, 1862, from a camp near Manassas Junction. In the letter, Gregory writes to the folks back home, “old capen gilburt is doun her doing All he Can to get us to volenter Agan he Think evry one orter stay” (i.e., “Old Captain Gilbert is down here doing all he can to get us to volunteer again; he thinks everyone ought to stay”). And then, in between the lines right above “one orter stay,” Gregory adds, “I want to kick ass.”

At least that’s what it looks like. But was Gregory suggesting he wanted to kick Old Captain Gilbert’s ass — or did he want to “kick ass” in general? Jonathan Lighter notes on the weblog ADS-L  “Something sounds a little off about ‘kick ass,’ but I don’t know how to interpret it except in the current sense.” The “current sense” is defined by Lighter’s Historical Dictionary of American Slang as follows:


kick ass [or (euphem.) butt or tail] 1 Esp. Mil. to enforce one’s authority or otherwise assert oneself mercilessly or pugnaciously; (also) (prob. the orig. sense) to subdue others by beatings…
2. to inflict punishment or defeat (in general). — usu. considered vulgar.

The earliest citation given in Historical Dictionary is from exactly one hundred years after the 1862 letter:


1962 Killens Heard the Thunder 44 [ref. to WWII]: Them Japs are kicking asses and taking names [in the Pacific].
Jonathon Green takes the expression back a bit further, to 1956, in his more recent work, Green's Dictionary of Slang:

Could the Civil War letter really represent an antedating of nearly a century? It’s true that obscene language can persist for decades in oral use before appearing in print, but it’s hard to believe kick ass could have stayed under the radar for that long. Still, the transcription here looks accurate.

Regardless of how we interpret the letter, this is just one tantalizing example of many that should turn up in the Private Voices archive as the site grows. It launched with 4,000 letters from four Southern states (North Carolina, South Carolina, Georgia, and Alabama), and according to the press release, 6,000 more transcribed letters from New England, the Northeast, and the Midwest are expected in the coming year, “along with a dynamic mapping feature so users can explore regional variations in word usage and speech patterns.”

CWL: This is the full text of the Strong Language weblog with some slight edits
Posted by Rea Andrew Redd at 10:45 AM No comments: