New and Noteworthy: California and the American Civil War 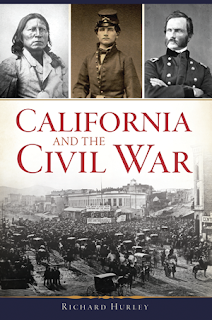 California and the Civil War is a clear and concise exposition on the Golden State’s history from The Bear Flag Republic through 1865. Hurley presents the geography of the state as a way of discussing the political leanings of Southern immigrants and Northern immigrants. California played a crucial part in political challenges during the 1850s. Statehood with or without slavery was a microcosm of national politics. Civil unrest in the state may be compared to civil war in the Kansas territory. Confederate military strategy included California and the author sees the state as suffering through the turmoil in the Southwest.
Hurley offers a discussion of civic life during the war that includes both Confederate partisans and Federal military adventures. He also notes the presence of the Sanitary Commission, its fairs and the Californians fighting east of the Mississippi River and even Mark Twain enters into the picture. The author gives a thorough accounting of his sources with end notes and a bibliography.

From The Publisher:  In the long and bitter prelude to war, southern transplants dominated California government, keeping the state aligned with Dixie. However, a murderous duel in 1859 killed "Free Soil" U.S. Senator David C. Broderick, and public opinion began to change. As war broke out back east, a golden-tongued preacher named Reverend Thomas Starr King crisscrossed the state endeavoring to save the Golden State for the Union. Seventeen thousand California volunteers thwarted secessionist schemes and waged brutal campaigns against native tribesmen resisting white encroachment as far away as Idaho and New Mexico. And a determined battalion of California cavalry journeyed to Virginia's Shenandoah Valley to battle John Singleton Mosby, the South's deadliest partisan ranger. Author Richard Hurley delves into homefront activities during the nation's bloodiest war and chronicles the adventures of the brave men who fought far from home.
Posted by Rea Andrew Redd at 10:07 AM No comments: