New and Noteworthy: Death, Disease and Life at War--Letters of a Civil War Surgeon 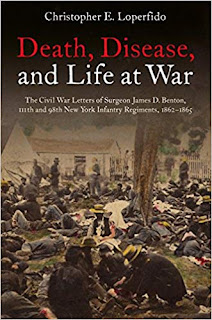 Christopher Loperfido offers the letters of James D. Benton as both a scholarly resource for educators and enlightening story for general readers of Civil War history. There are 42 letters spanning August 1862 through the post war era.

Among the several strengths of Loperfido's work are the introduction to each letter which includes a summation of the 98th and1 New York Regiment's history and combat experience, marches, winter encampments. Intriguing is the regiments' capture while at Harpers Ferry, Virginia in 1862, the branding of  them as the 'Harpers Ferry Cowards', and their interment at Camp Douglas while waiting parole.

Located at the bottom of the pages, Loperfido's notes are clear, concise and very helpful regarding, geography, diseases, medicines, and biography. Benton's presence in the Chancellorsville and Gettysburg campaigns is detailed in five letters which are enhanced by Loperfido's own experience and knowledge as a National Park Ranger at Gettysburg.

During the late autumn of 1863 Benton enters, as a patient,  the Seminary Hospital located in Georgetown, District of Columbia. His chronicling of his symptoms, diagnosis and remedies is insightful. He also at times discusses his pay, and his accompanying the paymaster on several occasions. His reflections on the temperaments of the Army of the Potomac, news reports of Grant and Sherman east of the Appalachians, and the  politics of the 1864 presidential election and the nominating conventions of both the Democratic and Republican parties is both informative and frank.

Loperfido places these letters in their proper context and needed transitions between each of them. He also describes Benton's life after the war; The four appendices review the work of Jonathan Letterman, director of the Army of the Potomac's medical division, the development of the Ambulance Corp, the use of amputations and dressings and the work of the U.S. Sanitary Commission.  Loperfido's work is accessible to those in high school and those readers who specialize in American Civil War medicine.

Posted by Rea Andrew Redd at 2:39 PM No comments:

New and Noteworthy: Challenges of Command in the Civil War 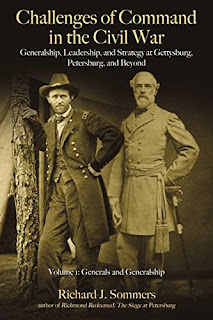 "New from Savas Beatie is Dr. Richard J. Sommers’s challenges of Command in the Civil War: Generalship, Leadership, and Strategy at Gettysburg, Petersburg and Beyond, Volume One of the series Generals and Leadership.

This is the first of two volumes, focusing on the actors and their performance. Volume II will look at Civil War Strategy, Operations, and Organization.

In addition to these ten chapters in 232 pages, you get:
Dr. Sommers is a name with which all students of the American Civil War is familiar. You’ve seen his name in the acknowledgements of countless books, as he was for more than four decades associated with the Army Heritage and Education Center (USAHEC) in Carlisle, Pa. He has authored dozens of articles, chapters, entries, and reviews, as well as the epic Richmond Redeemed which has been recently updated and published by Savas Beatie Publishing.

Text source:  https://bullrunnings.wordpress.com/2018/07/01/preview-sommers-challenges-of-command-in-the-civil-war/
Posted by Rea Andrew Redd at 11:28 AM No comments: