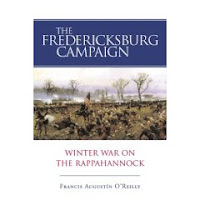 Next, Rable on Burnside.
Posted by Rea Andrew Redd at 11:47 AM