CWL --- Not a Brothers' War: How the Rebels Hated the Yankees 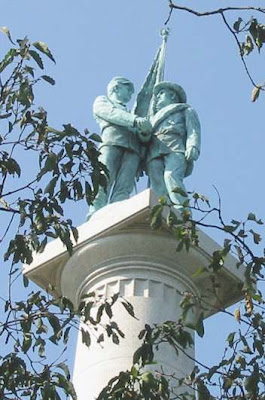 As the remnants of the Army of Northern Virginia stood before Joshua Chamberlain's division in April 1865, his spirit welcomed back the Rebels into the Union. 'Thin, worn, and famished, but erect, and eyes looking level into our . . .' Confederates received a salute from Union troops. John B. Gordon, Confederate general, returned the salute. Authors, painters and filmmakers use this story frequently to suggest the notion of a Brothers' War. A second story, appearing immediately after the salute story in Chamberlain's memoirs, is much less frequently discussed and used.

The second story suggests that the Brothers' War is a creation of a post-war, post-Reconstruction mentality. The salute scene is followed by a scene in which an unrepentant Rebel pointed tells Joshua Chamberlain that he hates him. The identity of the Rebel is not disclosed by Chamberlain but the text gives enough evidence to suggest that it may have been Henry Wise. A former Virginia governor during the Harpers' Ferry Raid incident and a father mourning the death of his son during the war, Wise places a curse on Chamberlain and all Union soldiers.

Throughout the war caricatures of Northerners were predominant in the discussions and writings of Confederates. In diaries, private letters and newspaper columns Northerners were labeled as inept, inferior, evil, and barbaric. This way of imagining the foe shows that Rebels drained complexity and individuality from representations of their enemies. Jason Phillips, the author of this chapter, states that "unprecedented destruction of the war made any real notion of brotherhood across the lives contradictory and absurd." (p. 69)

What did the term 'Yankee' connote for rebels? Pathetic foe, hypocritical reformer, cold industrialist, money-grubber, self-righteous Puritan, and demonic or inhuman barbarian is the list provided by Phillips in reviewing Rebel primary sources. In particular, the Southern religious pressed heaped derogatory language on Northerners. In the Southern mind, restoration of the Union was not a Northern war aim in and of itself; this purported strategic goal covered a desire by Northerners to rape, pillage, burn and promote miscegenation throughout the South.

By 1864, Southern popular literature advanced the idea that 'the North was trying to erase Southern civilization and Southern manhood' from Dixie states Phillips. (p. 73)
He quotes lyrics of Southern popular music to make the point. Threats to "women and property, including slaves, pervades Confederate verses and soldiers' writings." (p. 76) Before, during and after the war, Southern culture retested on patriarchy, female submission, land ownership and racial superiority. In Confederate minds, to lose the war was to doom Southern culture of political slavery and personal subjugation. When the perceived barbarians conquered the pastoral homeland of Dixie, Confederates like former-Virginia governor Wise faced an desolate future. The effort to reconstruct the Union was challenged by not the memory of a Brothers' War but actual hatred of the conqueror by the conquered.

Help Note: This chapter can be obtained by using your local library's inter-library loan services or by contacting me.
Posted by Rea Andrew Redd at 5:57 PM