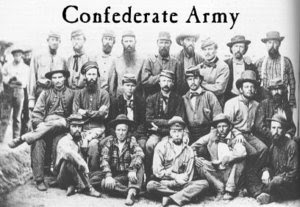 Northern mudsills versus Southern woodsmen. Yankee urban dwellers versus Southern farmboys. Better riding, independent-minded, superior shots, the men in 1861 who became the Army of Northern Virginia in mid-1862 would be able to take out 3, 5 or 7 Yankees. Just how “knowledgeable and experienced where these rural men who fought for the Confederacy in Virginia . . ?” Did pre-war experience create an indomitable fighting man in the Confederacy? (p. 45)

What advantages did Southerners bring into military service? For one motivation.
Viewed as a glorious, holy, sacred and patriotic endeavor performed by free men with honor, soldiers of the Confederacy insisted that they would win. This psychological and emotional edge was accompanied by pre-war militia training. At the very beginning of the war, Virginia Military Academy, Citadel, and a host of other military academies supplied leaders for the militia companies.

Yet, both in the North and South, the immensity of the war outstripped militia experienced. The army which Winfield Scott led into Mexico was numbered at 10,000, the size of a corps during the Civil War. Lee’s Army of Northern Virginia in 1862 was twice as large as Richmond, Virginia. in 1860.. Richmond the 26th largest city in the U.S.; the 25th largest city was Troy, New York. For many Southerners, the ANV was the largest community in which they had lived. Glatthaar, the author, understands that this new community was ‘a biological time bomb. (p. 50)

City dwellers had been inoculated by their survival of illnesses in their pre-war living conditions. Measles, mumps, typhoid, pneumonia, dysentery, and diarrhea took their tool in the ANV. Additionally, pre-war ‘rural living did little to develop concern over sanitation.. (p. 52) After 1st Manassas, Southern army encampments continued to suffer casualties from sanitation and hygiene issues related to the slaughtering of beef.

Despite a rural upbringing most Confederate soldiers had not slept and lived for extended periods out of doors. At home, food was prepared by mothers and daughters; in camp, cooking was done by males inexperienced with food preparation. Glatthaar cites examples of soldiers mistaking tallow for lard. Also, it is assumed that the Southern soldier had extensive experience with firearms. Casualties generated by negligence and accidents were a steady drain on company strength during 1861 and 1862.Glatthaar has found.

Many Confederate soldiers realized that military service was much like slavery. An extreme case of military disobedience at the company level were among Louisiana troops. Troops from other states acted in ways similar to the Louisiana men. “Removed fro traditional social controls and with too much time on their hands, young . . . responded with’ disruptive behavior. (p. 57) Wildly drunk, preferring prostitutes as female company, and gambling to the point of exhaustion, some Rebels were not good soldiers.

Virginia soldiers adjusted their military performance and discipline by 1862 when Lee took command of the Army of Virginia and made it into the Army of Northern Virginia. The proper sanWriting & Fighting From the Army of Northern Virginia: A Collection of Confederate Soldier Correspondence (Writing & Fighting the Civil War) by William B. Stypleitation, proper cooking, proper self-discipline, and proper obedience acquired by Virginia soldiers by June 1862 was what was their new commander, a very proper gentleman, R. E. Lee, demanded.

This essay is available from your local library, through inter-library loan, or from Civil War Librarian.

Writing & Fighting From the Army of Northern Virginia: A Collection of Confederate Soldier Correspondence, William B. Styple, Belle Grove, Press, 2003