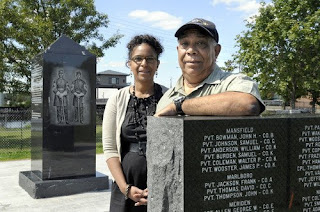 As a boy, Harrison Mero heard stories about his Grandpa Joe secretly ferrying slaves to the North through the Underground Railroad and listening to abolitionist Frederick Douglass speak in Connecticut. "We heard how Grandpa Joe was an outspoken guy at a time when people were fearful about speaking up," Mero said. But it wasn't until the day he buried his father in 1964 that Mero, 67, of Hamden, discovered another chapter in his great-grandfather's legacy.

In the same Woodbridge cemetery where Mero's father was buried, Grandpa Joe rested under a military headstone. Mero would later learn that Joseph K. Stills was one of more than 900 black and Native American men from throughout the state who volunteered to fight for the Union during the Civil War in the Connecticut 29th Colored Regiment. On Saturday, Mero and other descendants of the 29th will gather in Criscuolo Park in New Haven to unveil a much-anticipated memorial to the regiment. Mero said the memorial gives the unit long-overdue recognition and helps promote the dissemination of a rarely told Civil War chapter.

"This is history that children don't know," Mero said. In 1863, African American and Native American men from throughout the state enlisted for duty at the former Camp Terry in New Haven. The encampment along Long Island Sound — now a park with baseball fields and a playground — will be home to the memorial bearing regiment members' names.

Although they fought for the same cause as other Union soldiers, the men of the 29th were not treated as equals. They endured racial slurs, lived in poor conditions and could not carry guns until they left the state to fight. They were rarely promoted, and they were paid less than half of a white soldier's salary. The 29th fought in several crucial Civil War battles in Virginia and was the first infantry unit to reach the Confederate capitol of Richmond after Union forces broke through Gen. Robert E. Lee's lines. 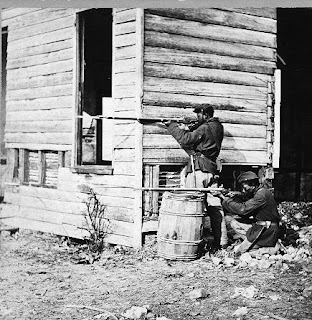 The 29th returned to Connecticut in October 1865. Forty-eight of the regiment's soldiers were killed, 139 were wounded and 178 died from disease, according to Tom Acri, an eighth-grade social studies teacher in Milford who wrote his master's thesis on the regiment while at George Mason University. Grandpa Joe survived the war and moved back to Connecticut, where he worked as a mason, stonemaker and carpenter until his death in Woodbridge on Feb. 6, 1909. As a child, Mero said, all he knew about the war came from John Wayne movies and Margaret Mitchell's book, "Gone With the Wind."

"When you saw something about the Civil War back then, our people were depicted as slaves working in the big house, talking in broken English," Mero said. "We assumed the war was all white people. My people were never shown on the battlefield." While in high school, Mero said, he read about the Buffalo Soldiers, the black cavalry and infantrymen sent to the Western frontier after the war. But it was not until Mero was in his 20s that he learned about his great-grandfather's role in the Civil War and the history that took place so close to home.

After his father's burial, Mero turned to his older brother, Albert, who told him about the 29th and about other relatives who served in the Civil War. A house fire at a relative's home destroyed photographs and documents that could verify his brother's stories, though. So with the clock ticking on who in their family could recall tales from the Civil War, the Mero family held a family reunion. Long-lost relatives connected. And those who had been quiet about history in the past began to open up, Mero said.

"That family tree ended up going in all kinds of directions," he said. For nearly a decade, the Descendants of the Connecticut 29th Colored Regiment C.V. Infantry told the unit's story in classrooms, but had always hoped to build a monument somewhere to hold their place in history. In 1998, when group members went to Washington, D.C., for the dedication of an African American Civil War memorial there, they talked to the memorial's sculptor, Ed Hamilton, about a monument for the 29th in New Haven. Hamilton, of Louisville, Ky., took the job. The group raised $200,000 for the memorial through grants and donations.

Saturday's dedication — slated for 2 p.m. — will be followed by receptions and a dedication ceremony for youths on Sept. 26 that will include a parade featuring students wearing armbands with the names of 29th Regiment soldiers. "I saw the plaque yesterday, and it brought tears to my eyes," Mero said this week. Though he wishes his brother, Albert, who died in 2006, was alive to see the memorial, Mero will be surrounded by several family members who also worked for years to make the memorial a reality. "This is going to make a very strong statement," Mero said. "It says, 'We were there and now we're back in the place where we started.'"

For more information about the regiment and Saturday's ceremony, visit www.thect29th.org.