On the 2nd Manassas Trail: Locating Kettle Run at the Battle of Bristoe Station 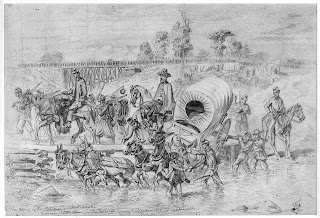 On the evening of August 26, after passing around Pope’s right flank via Thoroughfare Gap, Jackson’s wing of the army struck the Orange & Alexandria Railroad at Bristoe Station and before daybreak August 27 marched to capture and destroy the massive Union supply depot at Manassas Junction. This surprise movement forced Pope into an abrupt retreat from his defensive line along the Rappahannock River. On August 27, Jackson routed a Union brigade near Union Mills (Bull Run Bridge), inflicting several hundred casualties and mortally wounding Union Brig. Gen. G.W. Taylor. Ewell’s Division fought a brisk rearguard action against Hooker’s division at Kettle Run, resulting in about 600 casualties. Ewell held back Union forces until dark. During the night of August 27-28, Jackson marched his divisions north to the First Manassas battlefield, where he took position behind an unfinished railroad grade.

:
This hot summer day in late August I joined the a small troop accompanying J. Michael Miller, our guide to Bristoe Station. We walked along a nearly dry creek bed, a feeder to Broad Run, south of Broad Run and north of Kettle Run. As pathfinders we sought out the Orange and Alexandria Railroad, hoping to see the battle flag of the 5th New Jersey beyond, but alas the regiment passed before we arrived. The 115th Pennsylvania, in the fog of war mistakingly shot into the 5th New Jersey's ranks. As we moved up aside the railroad toward Bristoe Station, I thought I could smell fresh Forno Brand coffee from New Orleans, either fresh off the campfire from this morning's breakfast or from the nearby homes of Bristoe Station. While on the excursion I walked beside the proud father of a VMI Cadet as we sought to locate where the 8th Louisiana had protected the Dement's Maryland (CSA) Artillery.

A poignant detail presented by Miller, our guide, was that General Hooker finally arrived at Bristoe Station to find an abandoned field hospital. Amoung the wounded was a dying German immigrant who moaned, "Oh! How hard it is to die, when I have been in this land only three months." As the son of German immigrant parents myself, these words suddenly brought me back to the present to pen my recollections of a most memorable battlefield tour. For those who missed the 2:00 PM tour or any of the other Prince William County tours of the Kettle Run Battlefield on Saturday, August 29th, in commemoration of the 147th Anniversary of the Battle of Kettle Run and Second Manassas, on behalf of the Civil War Librarian, I commend to you an excellent article by our brigade leader, Mr. J. Michael Miller, who penned an excellent and extensive article on this often overlooked affair, titled, "The Battles of Bristoe Station" in Volume 26, Issue 2 of the Blue and Gray Magazine. The killing fields of this battle had much to do with sealing General Pope's fate at Second Manassas and the sacrafices here must never be forgotten.

My G-G-Grandfather was killed during the rearguard action August 27,1862.He was in Ewell's Division, Lawton's Brigade, 60th Georgia, Co.F. His name was Bailey James Dover.
In your tour was there any markers showing where the 60th Georgia fought? I plan to visit next summer and try to find where he fell. I know that the 60th was on the left of the Confederate line.

Thanks for any info.