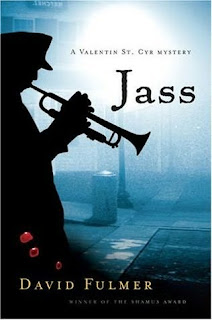 Again turn of the century New Orleans' red-light district is the setting for David Fulmer's follow-up to Chasing the Devil's Tail, his first novel with former policeman/private detective Valentine St. Cyr. Fulmer's spare, evocative narrative creates an murder investigation steeped in opium and bourbon, police and political corruption, and marriage and love. Fulmer builds uses an emotional scaffolding of distrust and grace from the first nove. St. Cyr is a multiracial Creole detective, with a deep backstory that is revealed smoothly throughout the second novel. St. Cyr emotional troubles hinder a solution to murders of four brutally jazz musicians. Lieutenant Picot, his former boss in the New Orleans police department, and his current employer, Tom Anderson, the "King of Storyville," challenge and threaten his loyalites. Both make demands that test his committment to a new and delicate relationship with a former prostitute. Historic figures such as Jelly Roll Morton and Madame Lulu are prominent in this story set in the Crescent City. Ghostly appearances of a female seem linked to both to the local voodoo clanns and the serial killings of former members of a Storyville jazz band featured in Chasing the Devil's Tail. A tangible environment flows naturally out of the actions fo the characters and impact of New Orleans on them. place. Fulmer's third in the series, Rampart Street, is on my desk.
Posted by Rea Andrew Redd at 11:22 PM