Wide Awake In 1860 America: In Search of Young Men For Voting and Fighting 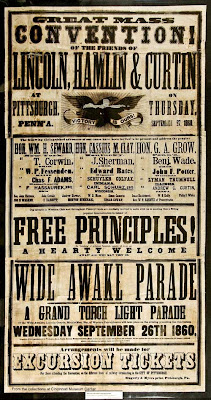 The initial Wide Awake club was founded in March 1860 in Hartford, Connecticut but with two months, from Bangor Maine to San Fransico California major cities and rural counties boated local chapters. Even upper South cities, such as Baltimore, Wheeling, and St. Louis held chatpters. The youth and militancy of the members differentiated it from other political organizations during the 1860 presidential campaign.

Social events, fraternal memberships, the publication of comic books and the wearing of goatees, attracted younger voters. A generation deeply shaken by the spectacle of partisan electioneering and instability seemed to be looking for a political identity that took their youth into account. An emphasis upon military-type organization and uniforms with social behaviour short of violence offered social strengths and voices to those who had yet to vote due to age or had voted in one or two presidential elections. 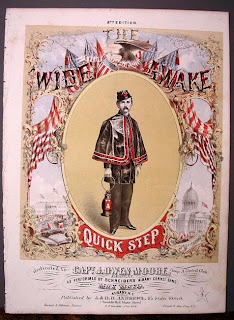 Parades and rallies in Pittsburgh, New York, Philadelphia, Chicago, Cleveland, Boston and other cities and counties of Wide Awake members, clad in black raincoats and black hats, carrying torchs and marching in military ranks and files startled Northern politicans and enhanced fears lurking in Southern hearts. Total membership numbers cannot be obtained but marchers thoughout the North may have totaledd 70,000. An estimate of 100,000 individuals seems reasonable which would translate into one percent of the 2009 U.S. population. Grinspan, the author, does not provide a figure for the percentage of Northern voters in the 1860 election that 100,000 would represent.

In a fine review of the past 150 years of literature, Grinspan reviews and disputes attempts by social and political historians to characterize the Wide Awakes as being coerced by an abundance of alcohol, the temptation to group violence, and a sheep-like disposition to follow the loudest political voice. Conversely, Grinspan states that the Wide Awake movement demonstrates the existence of a middle ground neglected by social and political historians. Wide Awakes grew from local conditions and from the bottom-up not the national conditions and from the top-down. 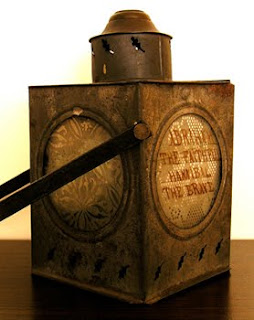 In general campaign clubs foster competition, used appealing symbols and offered a program of mass events. Grinspan finds that the Wide Awakes surpassed local and national expectations in each of the three categories. The Wide Awake movement was birthed in Connecticut, grew in central Illinois and southern Wisconsin, then reached to central New York, southern New Jersey and southern Maine. There appears to have been 250 Wide Awake chapters in the North with Chicago containing 48 of them. States such as Massachusetts, Vermont, and Michigan [each a Republican bastion] had few and apparently quiet chapters. The movement appears to have thrive in sections that contained hot political contents. The first chapters were organized to supply as body gaurds for Republican and Free Soil public speakers.

Grinspan likens the growth and movement through society of the Wide Awakes to a colorful dye dropped into a city's water supply. During the twelve months, March 1860 to February 1861, the movement appeared to be a spontaneous but the author states that it was a fascinating and deliberate effort that used the new communication technology of telegraphic news. Appealing to political, generational and social conditions, the Wide Awake movement took advantage of the new network of partisn newspapers and militia fever. A uniform could be purchased for two dollars and local talent, Ulysses Grant for example, taught precision marching. 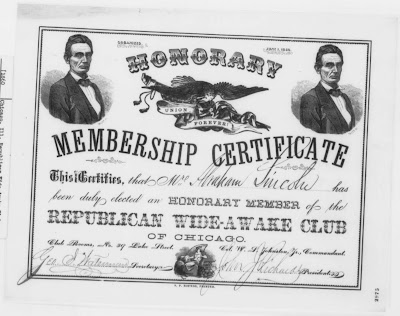 Bloodshed during Wide Awake mass demonstrations occurred in politically competitive cities of the lower North. Marchs were ambushed by rock and brick throwing opponents who damned and threaten to kill demonstrators who at times gave as good as they got. Guns sparked, knives flashed and clubs splintered. The Wide Awakes did not keep their marching formation when attacked; some fled and some assaulted their attackers. Marchers never displayed weapons but hid them under their raincoats. Focusing upon confronting northern Democrats, the Wide Awakes rarely considered the impression they were having on the South.

And then the war came.

Did the wide awakes wear the wide-awake hat, I wonder? Low round crown, medium-width, unrolled brim