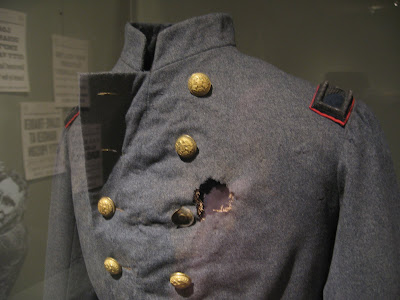 Col. Elmer Ellsworth never stepped foot in Fort Ward, but a lock of his hair and his uniform cap have made it here to the grounds of one of the dozens of Union strongholds built around the Washington, D.C., area after the outbreak of the Civil War. Ellsworth was the first Union officer killed in the conflict. His death on May 24, 1861, while removing a flag from the top of the Marshall House hotel in Alexandria caused a sensation throughout the nation, prompting thousands of men across the northern states to enlist for the Union cause and go to war against the South. He was made a martyr in the North and his image appeared on stationery, sheet music, pottery and memorial lithographs throughout the war.

Although Ellsworth's death preceded the construction of Fort Ward and the 67 other Civil War forts that guarded the nation's capital, he's the focus of a new exhibit at the Fort Ward Museum and Historic Site in Alexandria, just across the Potomac River from the District of Columbia. "We are a Union fort," said Walton Owen, assistant director and curator at Fort Ward, "and he's an important part of our local history and the occupation of Alexandria."

The 150th anniversary of Ellsworth's death is also the subject of an exhibit at the Smithsonian's National Portrait Gallery in Washington, D.C., and several of his artifacts — including the uniform coat he was wearing when he died — are on display at the New York State Military Museum in Saratoga Springs.

Forever linked with Ellsworth is James Jackson, the Marshall House proprietor and staunch secessionist who shot the Union officer in a stairway of the hotel. Cpl. Francis Brown, one of Ellsworth's soldiers, shot and killed Jackson, who was hailed in the South as the "first martyr" of the Confederate States of America. While Ellsworth is buried under a 40-foot-tall obelisk at his gravesite in upstate New York, there's no memorial in the South dedicated to Jackson, although his name was added to Alexandria's Confederate Statue 11 years after it was unveiled on May 24, 1889.

Before the war, Ellsworth gained national fame while leading a military-style drill team called the Zouaves, known for their distinct uniforms of red pantaloons, red fezzes and blue brocaded jackets. He also became close friends with Abraham Lincoln while clerking in the future president's law office in Illinois, and he campaigned for the Republican Party candidate during the 1860 election.

Fort Ward was named for Commander James Harmon Ward, the first Union naval officer to be killed in the Civil War. Construction began in September 1861 and was completed in about a month. The fort was the fifth largest of the installations collectively known as the Defenses of Washington. Traces of about 24 of the fortifications still exist, including Fort Ward, considered the best-preserved of the sites still accessible to the public. 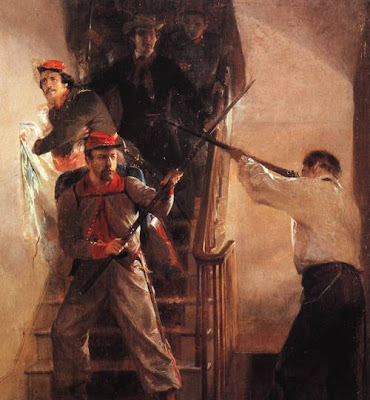 Operated by the city of Alexandria, the museum and adjacent park offer visitors a glimpse of what a garrison soldier's life was like during the Civil War. A reconstructed officers' hut represents a typical fort dwelling of the era, while Fort Ward's Northwest Bastion, mounted by several cannons, has been completely restored. Other earthwork walls have been preserved at the site, set amid the lush landscape of a 40-acre park located in a residential neighborhood. A road rings the site's perimeter while a walking path passes the old fort's bombproofs, earth- and grass-covered structures designed to provide an underground space for operations during an attack. Signage leads visitors to viewing platforms that keep people off the fragile earthwork walls.

The small museum is located near the site's entrance. Opened in 1964 during the Civil War's centennial, the museum interprets the fort's role in the Union's occupation of Alexandria, a vital crossroads town dating back to Colonial times. In addition to displays on the everyday life of Civil War soldiers, the museum features an exhibit on the "Ellsworth incident."

The exhibit includes a lock of his hair, a red kepi (cap) he wore, photographs of the young officer in uniform and contemporary published accounts of his death at the hands of James Jackson.

Most of a star from Jackson's secessionist flag, still stained with Ellsworth's blood, is on display, along with the "O'' from the Marshall House sign, one of the many pieces of the structure torn off the building by souvenir-hunting Union soldiers seeking a momento from the spot where Ellsworth was slain.

The Smithsonian's National Portrait Gallery, located on the site of a former Union hospital, is marking the Civil War's 150th anniversary with a series of seven exhibitions in the alcove linking two rooms with Civil War displays. The first — "The Death of Ellsworth" — includes artifacts from the "Ellsworth incident," including portraits of Ellsworth and Lincoln, as well as Alonzo Chappel's historic painting depicting the Union officer being shot by Jackson.

Also on display are Jackson's shotgun and the rifle Cpl. Francis Brown used to kill Jackson, along with a piece of the blood-stained flooring torn up by souvenir hunters from the hallway where Ellsworth died. Brown bequeathed the weapons and other items to the Smithsonian.

This article is continued at The Wall Street Journal, June 1, 2011.

You have to wonder about the fact that Jackson has no monument. He in fact was living what this country was founded upon. His free speech was violated by a uniformed officer of the government. The man entered his house without a warrant and tore down his personal property. Regardless of which side you take, have to wonder about the rights of a government to violate its own laws dealing with free speech. Great blog, keep up the good work.

We thought you might be interested in this press release about an interactive program we put in place with the Gettysburg Foundation...

You are welcome to cover this story or make use of the material in the press release for your blog. Please let me know if you have any questions.