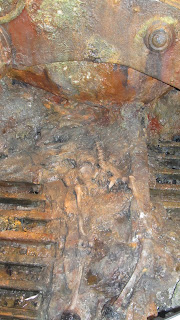 Text Source: Washingtont Post, March 7, 2013
Image Source: Civil War Librarian LLC. This is a photo of a cast of the remains as they were found in the recovered turrent of the U.S.S. Monitor. The cast of the turret's interior is on display at The Maritime Museum located in Newport News, Virginia.
Posted by Rea Andrew Redd at 10:17 AM