Challenged Story----Descendant of POWs on Stamp: Is It Family Folk Lore? 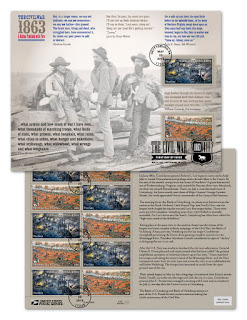 Following is a portion of the discussion regarding the barber's declaration that the three Confederate POWs in the famous photograph are his relatives.

This discussion is on the Pittsburgh Post-Gazette's webpage for the article.

Here is a portion of the discussion:

"Simply put this story does not add up with the historical records we have:

I pulled the service records for all three (and looked them up in the NC Troop roster) and theyall come from the same region of North Carolina (Ashe, Alleghany, Wilkes Counties). Only one minor problem, the Andrew who is mentioned as being a member of the 30th NC was wounded in the right lung at Chancellorsville and died of wounds on June 19, 1863, almost an entire month before the battle of Gettysburg.

In addition to that the ages of the men make the story a bit difficult, Andrew was listed as being 21 years old when he enlisted on September 21, 1862, Ephraim Blevins is listed as 18 years old at the time of his enlistment on August 15, 1862. Somewhat difficult to be the father when you are only separated by three years.

This does not mean one or two could not be identified, but I am still very skeptical of this, especially with the identification of Andrew Blevins."

Could you be looking at the wrong Andrew? Andrew Blevins, along with his son Ephraim, lived in Smythe County, VA in 1860. An Andrew Blevins enlisted in the 62rd Virginia, which pulled recruits from Smythe County. I would be interested to see that Andrew’s service record.

Also, the Andrew Blevins who served in the 30th North Carolina, was from Wilkes County, NC, not Virginia. The NC Andrew died in 1863, but the Virginia one lived until 1889.

There is an Ephraim Blevins of the 37th NC on the POW list, who was taken at Gettysburg in 1863.