Off Topic Fiction---Rogue Island, Rhode Island and Relationships Between Lawyers and News Writers 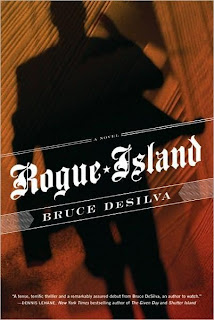 Rouge Island: A Novel, Bruce DeSilva, Forge/Tom Doherty Associates Publishing, 2010,  302 pp., $24.99 hardcover, $14.99 trade paper cover.
From The Publisher: Liam Mulligan is as old school as a newspaper man gets. His beat is Providence, Rhode Island, and he knows every street and alley. He knows the priests and prostitutes, the cops and street thugs. He knows the mobsters and politicians--who are pretty much one and the same. Someone is systematically burning down the neighborhood Mulligan grew up in, people he knows and loves are perishing in the flames, and the public is on the verge of panic. With the police looking for answers in all the wrong places, and with the whole city of Providence on his back, Mulligan must find the hand that strikes the match.

From Publisher's Weekly:  DeSilva's lengthy career as a reporter for the Providence (R.I.) Journal has provided him with the writing skill and the in-depth knowledge of city room and cityscape so well displayed in this strong debut crime novel. It's also allowed him to create a totally believable protagonist in Liam Mulligan, a beleaguered journalist seeing his old neighborhood being destroyed by arson and his newspaper by reader disaffection. Mulligan's first-person narration is filled with emotion, not the least of which is his love-hate relationship with his city and state. And there are suspenseful moments of high tension.


From Book List: *Starred Review* Born and raised in the Mount Hope section of Providence, Rhode Island, journalist Liam Mulligan won’t simply report on the rash of arsons killing lifelong friends and loved ones in his old neighborhood. He wants to know more and launches an investigation, discovering a heavy-handed plot to own Mount Hope in order to redevelop it. Along the way, he’s threatened, beaten, arrested on suspicion of arson and murder, suspended from his newspaper, and targeted with a Mob contract on his life. Mulligan must turn to some unlikely allies to save his tired old neighborhood and secure justice. Rogue Island has everything a crime fan could want: a stubborn, street-smart hero with a snarky sense of humor; more than a baker’s dozen of engaging characters; a fast-paced plot; a noirish style; a realistic postmillennium newspaper setting; mean, pot-holed streets; and, best of all, a knowing portrait of a small city and a tiny state famous for inept government, jiggery-pokery, and corruption. Debut novelist DeSilva began a four-decade career in journalism as a reporter for the Providence Journal, and his take on the city and state is harsh but also affectionate, as when he describes graft as Rhode Island’s “leading service industry,” noting that “it comes in two varieties, good and bad, just like cholesterol.” This tremendously entertaining crime novel is definitely one of the best of the year. --Thomas Gaughan
CWL:  DeSilva's writing style is short, quick and to the point, with lots of dialog and very few descriptive paragraphs.  The author develops characters in their conversations. The settings are a newspaper's offices, bars, grocery stores, fire engine houses, cars, police interrogation rooms and bedrooms.  Rogue Island accurately describes the slow demise of a metropolitan newspaper and a mill town. The main characters are interesting and somewhat unique.  Rogue Island is detective fiction in which the detection is performed by a print news writer.  Overall, a second novel with the same characters would be welcomed.
Posted by Rea Andrew Redd at 11:14 AM