New and Noteworthy--Lincoln, An Episcopal Priest, Bureaucratic Corruption And 300 Sentenced To Be Hanged 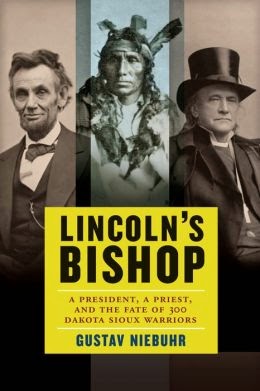 The Dakota War of 1862 began on August 17 in southwest Minnesota and ended with the mass execution of 38 Dakota tribe warriors on December 26, 1862. Throughout the late 1850s, treaty violations, unfair annuity payments and bureaucratic corruption by Federal government agents caused destitution and starvation among the Dakota tribes.

In early December, my military court 303 Sioux prisoners were convicted of murder and rape sentenced to death. Some trials were conducted without defense attorneys; other trials lasted less than five minutes. Abraham Lincoln reviewed the court proceedings and commuted the death sentences of 264 prisoners and allowed the execution of 38. Lincoln received the counsel of Henry Benjamin Whipple, a native of New York, a missionary priest to Chicago, an elected first Episcopal bishop of Minnesota, did not meet a Native American until he was 37 years old.

Whipple met and respected the Dakota Sioux, watched and learned first had the corruption of the Federal Office of Indian Affairs. By letters and a visit to Washington D.C., he informed the President that the agency was corrupt, the agents were political hacks,, the vendors were greedy providers of illegal alcohol and abusive of Native American women. At stake for Whipple was not only an injustice but an offense to religious principles that demanded aggressive resistance. By 1860 he began a letter writing campaign that described the problems and proposed remedies.

The 15th President,James Buchanan did not respond; the 16th President did. After a face-to-face interview of Whipple, Lincoln mentioned to a friend that Whipple's testimony had 'shaken him down to his boots.'  Whipple organized other bishops, who by virtue of their habits, were reluctant to speak out on the issues of public issues, even those issues of slavery, secession or politics.

In Lincoln's Bishop, Gustav Niebuhr carefully offers evidence of Whipple's investigation and engagement with politicians regarding the Dakota Sioux.  Niebuhr is a professor of newspaper and online journalism, the founding director of the Carnegie Religion and Media Program, and winner of awards for the reporting of religion.  Lincoln's Bishop offers a clear and concise narrative supported by primary sources. It moves briskly does not stray away from the central features of the story. Currently 'telling truth to power' is often a slogan to justify personal self absorption, narcissism and self promotion.  Niebuhr's work offers the story of one man's  'telling truth to power' as selfless and motivated by the gospel.