New---William Cushing Versus The CSS Albemarle: Adventures and Heroics 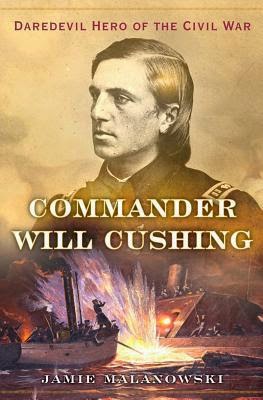 Commander William B. Cushing is best known for his leadership in the sabotage effort which sank the CSS Albemarle during the night of October 27-28, 1864. Born in Wisconsin and raised in western New York provided with a both down to earth view of life and the ability to create fun where every his lived and worked. He was expelled from the U.S. Naval Academy for poor study habits and a surfeit of demerits during his final year. He was forced to resign from the academy just 90 days before graduation. Jamie Malanowski describes Cushing throughout his early years as having a talent for buffoon.

Cushing's friends and relatives in Washington, D.C, lobbied the secretary of the navy who had been in the post for just 16 days.  Gideon Welles met with Cushing and informed him that his appeal would not be accepted. Then came the bombardment of Fort Sumter and the pleading of Benjamin Butler to Gustavus Fox, assistant secretary of the navy. In the emergency of the moment, Cushing reentered the navy as a acting master's mate and joined the crew of the U.S.S. Minnesota. Cushing found opportunities to create adventures. In 1862 Cushing was promoted to lieutenant and later in life to commander.

The Confederacy's ironclad ram, Albemarle, dominated the frequently contested region of the Roanoke River and its major port, Plymouth.  During the late summer of 1864 considered various plans for destroying the Albemarle; two of the plans were submitted by by Cushing. Cushing's daring plan and heroic execution earned him a reputation and fame that lasted his lifetime.

Malinowski offers a witty portrait of Cushing and his adventures. With some very short captures and some very extensive chapters, he briskly moves the story forward from Cushing's childhood and to his death. Reckless and impatient during his childhood and adulthood Cushing rushed through his own life. The author does not loiter either and propels the narrative forward at a lively pace. Malinowski is a writer and editor who has served eight or more magazines and newspapers.  Most recently he has served as a lead writer for The New York Times' sesquicentennial Disunion column. Additionally he has written novels, biographies, plays, and an HBO film. Commander Will Cushing is a well assembled story which reflects the author's career in the field of magazine writing.