New and Noteworthy----Gallagher's and Waugh's An American War 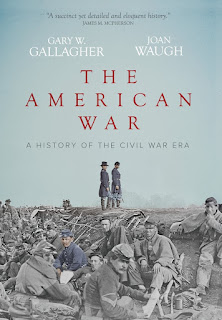 Blurbs:
"The authors have written a succinct yet detailed and eloquent history of the conflict that preserved and reshaped the nation in ways that continue to affect us today. Noteworthy features of The American War are the inclusion of Reconstruction as an integral part of the war, as indeed it was, and a final chapter on the conflicting memories of the war by those who experienced it as they attempted to give meaning to their experiences." -James M. McPherson, author of Battle Cry of Freedom, winner of the 1989 Pulitzer Prize

"Staying on top of the past generation's scholarship on the Civil War would be a full time enterprise, and still any reader would inevitably fall behind. That makes all the more impressive the synthesis provided in Gallagher and Waugh's The American War. No other recent work has so mastered the content and contributions of the best historians of our time, and distilled it into a work that is at once comprehensive and yet manageable. In their graceful words, Gallagher and Waugh offer the full context of the war's coming, its course at home and in the field, and its consequences, both as it happened and as Americans chose to remember it. This is easily the best one-volume assessment of the Civil War era to date." -William C. Davis, author of Crucible of Command: Ulysses S. Grant and Robert E. Lee-The War They Fought, The Peace They Forged

"It is hard to see how any one brief volume could better deal with this vast subject. Gallagher and Waugh know all there is to know about the Civil War and manage to convey that knowledge with balanced judgment, engaging quotations, up-to-date scholarship, and humane insight." -Edward Ayers, President Emeritus at the University of Virginia

"The authors manage to do justice to individual experiences and national goals in both the Union and the Confederacy, consider military strategies and battlefield tactics throughout the entire geographic landscape, and contemplate the war through the eyes of celebrated leaders, anonymous citizen soldiers, and a diversity of civilians - both white and black." -Matthew Gallman, author of Defining Duty in the Civil War: Personal Choice, Popular Culture, and the Union Home Front

Gary W. Gallagher is the John L. Nau III Professor in the History of the American Civil War at the University of Virginia. The author or editor of numerous books, most recently The Union War (2011) and Becoming Confederates: Paths to a New National Loyalty (2013), he has also participated in more than three dozen television projects in the field, and is the recipient of the University of Virginia's highest teaching award.

Joan Waugh, professor of History at UCLA, has published numerous essays and books on Civil War topics, including her prize-winning U.S. Grant: American Hero, American Myth (2009). Waugh also has held fellowships from the Huntington Library, National Endowment for the Humanities, and Gilder Lehrman Institute and been honored with four teaching prizes, including UCLA's most prestigious teaching honor, the Distinguished Teaching Award.
CWL:  A college text book for under $30, 304 pages, and  a hardcover to boot. Might be a scholarly book market crossing over to the popular culture market.
Posted by Rea Andrew Redd at 10:01 AM