News---Masterpiece: The Intimacy of a Sharpshooter On Picket Duty 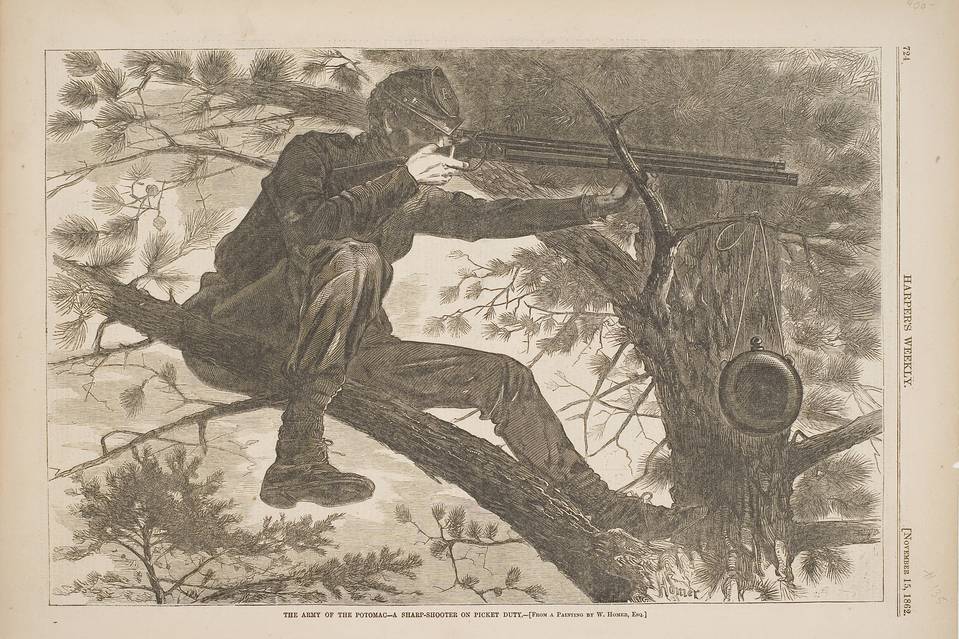 We are in the tree with the soldier, complicit with the violence that is about to occur. Photo: Davis Museum at Wellesley College / Art Resource, NY.                                                                     Winslow Homer (1836-1910) was one of America’s great painters but also a great illustrator. “The Army of the Potomac—A Sharp-Shooter on Picket Duty” appeared on the cover of Harper’s Weekly on Nov. 15, 1862, as part of a series of illustrations depicting the everyday lives of Union soldiers. Homer was only 26 years old, without formal training, moving from Boston jobs illustrating local magazines, sheet music and business ads to a career in New York supplying art to America’s leading news and lifestyle magazine. magazine.                                                                                         Known by its abbreviated title, “The Sharpshooter” is a work of masterly economy, conveying a moment of ruthlessness and randomness. It has little if any precedent in American art. It brilliantly aligns message—someone is about to kill and someone is about to die—and medium, a publication whose storytelling needs to grip the reader quickly and tightly.                                                  Mid-19th-century newspapers and magazines almost never used color illustrations. The technology was too primitive, leaving artists like Homer the task of orchestrating images and story lines using lights, darks and half tones. Homer worked for 20 years as an illustrator for Harper’s Weekly. By the early 1870s, he was one of the country’s most famous illustrators. Until then, his career as a painter was sporadic. As an illustrator before periodicals showed photographs, Homer was a precursor to the great newspaper photographers or the cameramen who accompany television or Internet reporters. He was a newsman. Much of Homer’s work portrays events occurring in an instant—a gust of wind, say, unsettling big things like land or sea, or small things like a lady’s dress on a stormy day. In the case of our sharpshooter, we see the moment he is about to pull the trigger.
Sharpshooters were uncommon in America until the Civil War, when they became useful but reviled in both the Union and Confederate armies. Sharpshooters drained the valor from war. Often hidden in trees, they stalked their victims and reduced them to hunted animals. With sharpshooters in the neighborhood, no one felt safe. When captured, they were usually treated as murderers and immediately executed.
Homer zooms in telescope-style, eliminating clutter to give us just the facts. His sharpshooter is big, his foot sticking in our space. We are in the tree with him—uncomfortably complicit and silent witnesses. Diagonals lead from the sharpshooter’s feet, up his legs and arms, to his hand. We can get there quickly, as it’s the whitest, brightest passage. Graphically, the hand’s simple palette and contours focus us, as does the sharpshooter’s bright, beady eye. The image is about killing but also about looking, finding and stalking. To emphasize the point, the canteen hanging near the soldier suggests a target.
The Civil War figured hugely in American illustration, much of it concerning battlefield heroics, deathbed scenes, the romance of separated lovers, or homecomings. Homer’s Civil War work treats different subjects: the indiscriminate violence of war, the confusion of battle, and the boredom of camp life.
In 1863, Homer finished a small painted version, now owned by the Portland Museum of Art in Maine, that closely follows the Harper’s illustration. Its jewel-box size suggests a preciousness that seems at variance with the violence at hand, yet its scale promotes a sense of intimacy. The subject works better in black and white and on the printed page. Paint and color soften the narrative. To convey ruthlessness, a simple palette and the graphic line work best.
“The Sharpshooter” likely began as a drawing and was then produced as a wood engraving suitable to mechanical mass-production. Since the print was so widely produced, most museums own it. It is often displayed in Civil War anniversary shows. And, as the 2014 film “American Sniper” demonstrates, this particular practice of war still exists and still fascinates.

Advertisement
Death often appears in Homer’s work. In the dramatic rescue pictures from the mid-1880s, where women are pulled from the sea, we don’t know whether they are dead or alive. Homer’s hunting scenes from the 1880s and 1890s are about stalking.
One of Homer’s last pictures is “Right and Left” (1909), in the National Gallery. Two ducks fly above the ocean. The blast and smoke from a faraway hunter’s gun signal the moment when one bird has just died, its neck collapsed as it plummets toward the water. The other convulses, its eye wide as a plate. It’s the moment of death. “The Sharpshooter” and “Right and Left”—almost 50 years apart—are as condensed, as moving, and as powerful as the best of news stories.