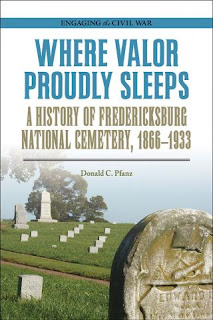 From the Publisher: Many books discuss in great detail what happened during Civil War battles. This is one of the few that investigate what happened to the remains of those who made the ultimate sacrifice. Where Valor Proudly Sleeps explores a battle’s immediate and long-term aftermath by focusing on Fredericksburg National Cemetery, one of the largest cemeteries created by the U.S. government after the Civil War. Pfanz shows how legislation created the National Cemetery System and describes how the Burial Corps identified, collected, and interred soldier remains as well as how veterans, their wives, and their children also came to rest in national cemeteries. By sharing the stories of the Fredericksburg National Cemetery, its workers, and those buried there, Pfanz explains how the cemetery evolved into its current form, a place of beauty and reflection.

Donald C. Pfanz has written five books, including Richard S. Ewell: A Soldier’s Life and War So Terrible: A Popular History of the Battle of Fredericksburg. In his thirty-two-year career with the National Park Service, he worked at Fredericksburg and Spotsylvania County Battlefields Memorial National Military Park, Petersburg National Battlefield Park, and Fort Sumter National Monument.

"This might be the best book ever written about a national cemetery. With a depth of knowledge born of decades of work, Donald Pfanz tells in vivid form and in close detail the story of how, over time, a place of struggle became a place of remembrance."—John J. Hennessy, author, Return to Bull Run: The Campaign and Battle of Second Manassas

"Pfanz reveals the horrors of war and the tragic tales of sacrifice that involved incredibly high percentages of unknown dead. Anyone interested in the funeral practices of the Union Army, or in better understanding the sacrifices for freedom, will find this book enlightening."—William A. Blair, author of With Malice toward Some: Treason and Loyalty in the Civil War Era