New and Noteworthy: Marching, Plundering and Payback with Ewell's Corps in Maryland and Pennsylvania 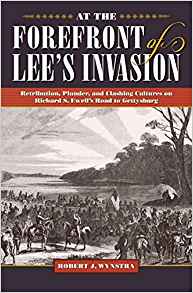 Civil War Librarian: Students of the Gettysburg Campaign are well served by Robert Wynstra's At The Forefront of Lee's Invasion. He fully integrates the Confederate cavalry's reconnaissance efforts with the progress of Ewell's corps' march from June 10 to July 1.The positive and negative attributes of the corps' division and brigade commanders as well as cavalry commander Albert Jenkins' are fairly presented. Diaries, letters and recollections by infantrymen, cavalrymen and their commanders are on every page. Wynstra's offers splendid, rarely seen photographs collected by county historical societies. Also, dominating the story are the civilian accounts of their encounter with Ewell's troops.  The author discusses Lee's directives regarding the difference between fair seizures of private property, plundering, and theft, Ewell's understanding of the directives, and the troops constant hunger along with the replacement of worn out uniforms and brogans. Also, included are the issues of collecting African Americans for their return to slavery and white civilians resistance to that collecting.  The Pennsylvania emergency militia's localized and haphazard encounters with the invasion are not neglected by the author. Wynstra's At The Forefront of Lee's Invasion is a splendid effort and achieves a bit of suspense in regard to the Confederates' approach to Gettysburg. If, before the battle, another week had been available  . . . .


From the Publisher: After clearing Virginia’s Shenandoah Valley of Federal troops, Gen. Robert E. Lee’s bold invasion into the North reached the Maryland shore of the Potomac River on June 15, 1863. A week later, the Confederate infantry crossed into lower Pennsylvania, where they had their first sustained interactions with the civilian population in a solidly pro-Union state. Most of the initial encounters with the people in the lush Cumberland Valley and the neighboring parts of the state involved the men from the Army of Northern Virginia’s famed Second Corps, commanded by Lt. Gen. Richard S. Ewell, who led the way as Lee’s veteran soldiers advanced north toward their eventual showdown with the Union army at the crossroads town of Gettysburg.

The move to the North lasted for nearly a month and encompassed the major battle at Winchester, Virginia, with more than 5,000 casualties; five skirmishes with more than 100 men killed, wounded, and captured in each; and several other minor actions. Civilian property losses in the North amounted to several million dollars. The interactions along the way further laid bare the enormous cultural gulf that separated the two sides in the war. As Robert Wynstra explains, Ewell and his top commanders constantly struggled to control the desire among the troops to seek retribution for what they perceived as Federal outrages in the South and to stop the plundering, working to maintain strict discipline in the army and uphold Southern honor.

Despite the yearly flood of books on Gettysburg, the Confederate advance has been largely ignored. Most books devote only a few pages or a single short chapter to that aspect of the campaign. In this new study, Wynstra draws on an array of primary sources, including rare soldiers’ letters and eyewitness accounts published in local newspapers, manuscripts and diaries in small historical societies, and a trove of postwar damage claims from the invasion to fill in this vital gap in the historiography of the campaign.
Posted by Rea Andrew Redd at 5:04 PM