New and Noteworthy--The Army of Tennessee's Failure To Win 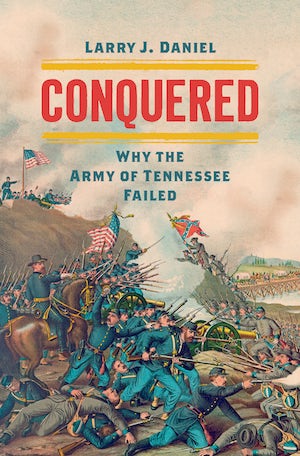 Why did the Confederate Army of Tennessee consistently suffer military defeats? The Army of Northern Virginia won most of their battles until 1864. Was it just a matter of a different caliber of generals?  Some notable historians answer the question with an affirmation and that personalities made the difference and that there were Virginians and then there was everybody else.

Larry J. Daniel states that generalship of one of several factors and the other factors included sectionalism inside the Army of Tennessee's ranks, geography and rivers defied tactical solutions. Regional politics which included reluctant Kentuckians and eastern Tennesseans were also a cause of dissent among officers and enlisted men. An ill-trained officer corps lacked both skills and a depth of talent. Its cavalry corps was handicapped by a lack of disciplined leadership and a preponderance of strategic mis-directions, and tactical mis-fortunes. If the Army of Northern Virginia is a exhibit of the vitality of the Confederacy then the Army of Tennessee is an exhibit of the fragility of the Confederacy.  And yet the Army of Tennessee stayed on the field.

Stanley Horn's 1941 The Army of Tennessee and Thomas Connelly's 1971 two volumes, The Army of the Heartland and The Autumn of Glory, Richard McMurray's Two Great Rebel Armies each present political, logistical, and geographic factors combining with dysfunctional personalities and naive, independent spirits. Daniel's work is much like Joseph Glatthaar's and George Rable's works which combines war, society, and the natural environment to evaluate Confederate military commanders and their troops. Daniel views the Army of Tennessee of 1861 and 1862 as having flawed foundations resting on sectionalism and professional incompetence. Redeeming characteristics include the brotherhood of Tennesseans and the sway of evangelical Christianity in general over the troops of several states. Also, Daniel's review of arms and ammunition supplies, food and horses availability was sufficient in general but the ability to transport these to an army on campaign or in winter quarters was sadly lacking.

Daniel offering of diaries, letters to home and letters to newspapers is notable and convincing of the larger points which he makes. His coverage of the Army of Tennessee's campaigns and battles is insightful and at times, even suspenseful. Conquered: Why The Army of Tennessee Failed is a cogent and clearly written exposition of the victories and defeats, the tribulations and trials, and perseverance of volunteer soldiers pressed on all sides but enduring through the last days.

From the Publisher:  Operating in the vast and varied trans-Appalachian west, the Army of Tennessee was crucially important to the military fate of the Confederacy. But under the principal leadership of generals such as Braxton Bragg, Joseph E. Johnston, and John Bell Hood, it won few major battles, and many regard its inability to halt steady Union advances into the Confederate heartland as a matter of failed leadership. Here, esteemed military historian Larry J. Daniel offers a far richer interpretation. Surpassing previous work that has focused on questions of command structure and the force's fate on the fields of battle, Daniel provides the clearest view to date of the army's inner workings, from top-level command and unit cohesion to the varied experiences of common soldiers and their connections to the home front. Drawing from his mastery of the relevant sources, Daniel's book is a thought-provoking reassessment of an army's fate, with important implications for Civil War history and military history writ large.
Posted by Rea Andrew Redd at 3:19 PM