"While our soldiers fight, I can stand and feed and nurse them. My place is anywhere between the bullet and the battlefield." A statement made during the Battle of the Wilderness, May 1864.

"General Sherman was right when addressing an assemblage of cadets he told htme that war was Hell!Deck it as you will,it is this, and whoever has looked active war full in the face has caught some glimpses of regions as infernal, as he may ever fear to see."

Men "have always known a great deal too much about it [war]for the good of their kind. They have worshipped at Valkyria's shrine, and followed her siren lead, till it has cost a million times more the the whole world is worth, poured out the best blood and crushed the fairest forms the God God has created." 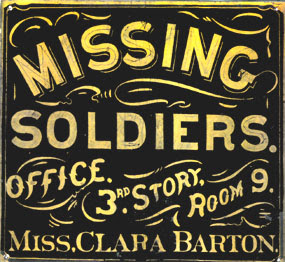 "If I were to speak of war it would not to show you the glories of conquering armies but of the mischief and misery they strew in their tracks; and how, while they marched on with tread of iron and plumes proudly tossing in the breeze, some one must follow closely in their steps, crouching to the earth, toiling in the rain and darkness, shelterless themselves, with no thought of pride or glory, fame or praise, or reward; hearts breaking with pity, faces bathed in tears and hands in blood. This is the side which history never shows." These quotations from The Oxford Dictionary of Civil War Quotations, John D. Wright, ed, Oxford University Press, 2006, pp. 21-22.

The best biography of Clara Barton is Woman of Valor: Clara Barton and the Civil War by Stephen B. Oates, The Free Press, maps, illustrations, notes, index, 527 pages, 1995. 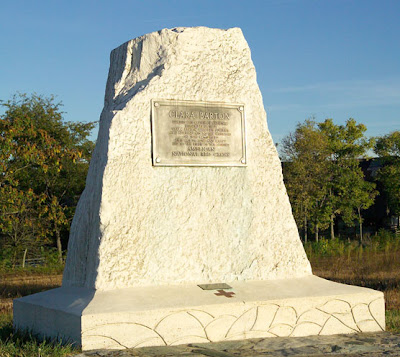 Above (R) is a colorized b/w photograph of Clara Barton. Above (L) is a sign recently discovered in a Washington, D.C. attic believed to be over Clara Barton's 1865 and 1866 office of Missing Soldiers. On the (R) is the Clara Barton Memorial on the Antietam Battlefield. The memorial is located about 300 yards south of a farm at which she established a first aid station. This monument is located on the same road on which the Pennsylvania Reserve Division's monuments stand.
Posted by Rea Andrew Redd at 3:45 PM