Other Voices----Another Theft of America's Past 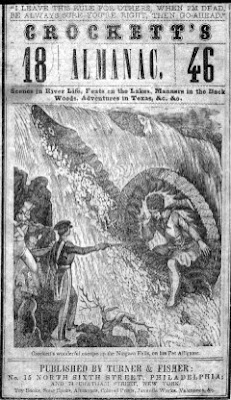 A state archivist was charged Monday with stealing hundreds of artifacts — documents representing "the heritage of all Americans," according to the history buff who found some of them on eBay — to pay his household bills.

Daniel Lorello, 54, is accused of taking the rare items from the New York State Library, including Davy Crockett Almanacs, Currier and Ives lithographs and the 1865 railroad timetable for Abraham Lincoln's funeral train. Authorities believe he hawked them for tens of thousands of dollars, using much of that to pay off his daughter's credit card debt. "This crime is especially repugnant, because it's dealing with historic documents," state Attorney General Andrew Cuomo said. "It's literally stealing the legacy of the state of New York page by page."

Lorello, an archives and records management specialist in the New York Department of Education, pleaded not guilty Monday to charges of grand larceny, criminal possession of stolen property and scheme to defraud and was released on his recognizance. He faces up to 25 years in prison if convicted. In a handwritten statement released by Cuomo's office, Lorello said he took "more than 300 or 400 items in 2007 alone."

He said he "particularly liked" artifacts associated with the Revolutionary, Civil and Mexican wars, World War I, black Americana and "anything related to the Roosevelts and Jewish items." Officials found hundreds of documents and artifacts in Lorello's home over the weekend. Authorities believe the theft goes back to 2002, although it accelerated in 2007.

"I took things on an as-needed basis to pay family bills, such as house renovations, car bills, tuition and my daughter's credit card problem," Lorello wrote. He said he took many items last year because his daughter "unexpectedly ran up a $10,000 credit card bill."

Lorello also said his theft increased after he learned that surveillance cameras were to be installed in the library. Joseph Romito, a Virginia attorney and avid history buff, tipped off authorities after he saw one of the items, a four-page letter from Vice President John Calhoun written in 1823, listed on eBay. "I wanted to identify the recipient of the letter," said Romito, who researched the document and discovered it belonged to the state library. 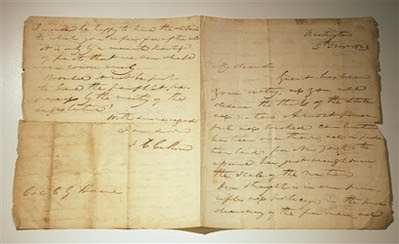 "These kinds of items ... represent the heritage of all Americans," Romito said. "I am gratified that I had some small part to play in it." The attorney general's office placed the winning bid of about $1,800 on Calhoun's letter. "We're working on recovering those documents sold on eBay," Cuomo said, noting that investigators planned to review Lorello's sales records. "We're asking the traders to please check their collections." Lorello, who began working at the state archives in 1979, was placed on administrative leave from his $71,732-a-year job. He made no comment as he left court and messages left on his answering machine were not immediately returned.

It's unclear how much Lorello made from his sales. In some cases he went to trade shows and exchanged the stolen items for others, authorities said. But officials said in just two sales of Davy Crockett Almanacs — popular 19th-century pamphlets about the frontier hero's exploits — he received more than $5,000.

I actually know Dan Lorello. A number of years ago, when I was writing my book Little Phil, the issue of whether Phil Sheridan had been born in Albany, NY arose. I knew Dan from having him help me with getting materials from the papers of William Woods Averell for a prior book project, and I wanted to see what records there were of Sheridan's possible birth in Albany, which is what Sheridan himself claimed. Dan did some digging for me and confirmed what I suspected, which is that no such records existed (for good reason--Sheridan was born in Ireland, and those records do, in fact, exist). Later, I wanted to include a photo of the equestrian monument to Sheridan that sits outside the state capitol building in Albany in the book, and Dan took that photo for me. In fact, the photo in the book is credited to him.

To say that I'm profoundly disappointed does not do it justice. I never would have guessed that Dan would be the sort to do this kind of thing, but then again, nobody ever really knows....

Eric,
Another sad story of personal dollars overcoming personal ethics.
I wonder what his second career will be? I bet that if he cooperates fully, he won't do jail time but will be on probation for a decade.
Rea

I don't know, but I can pretty much guarantee you that it will have nothing to do with the preservation of rare documents.....