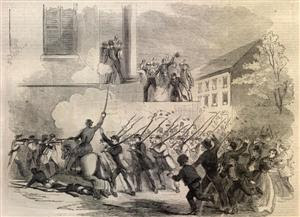 "In the early months of 1861--as the Confederate flag unfurled above Fort Sumter, as bands played and newly formed regiments paraded in town and cities throughout the North and the South--two civilians sat disconsolately at the sidelines of the Civil War. One had recently taken a desk job running a a horse-drawn trolley line. He spent most of his days pushing papers, trying his hardest to concentrate on the minutiae of fare revenues and fodder costs, in an office permeated with pungent aromas from the company''s adjacent stables. The other man was down-at-the-heels, small-town shop clerk who had come to the city in search of an officer's commission. He camped out at his in-laws' house, trudging around the city each day, fruitlessly trying to attract the attention of the local military authorities. The trolley-car executive was named William Tecumseh Sherman. The luckless clerk was Ulysses S. Grant. Both--as unknown to one other, probably, as each was to the nation--had found themselves in St. Louis." [20]

With this admirable beginning, Adam Goodheart describes the leading city in one of the nation's most populous and most slave holding states. At the crossroads of the North and the South, of agriculture and industry, of wage labor and slave labor, of native and immigrant Americans, St. Louis was crucial. Lincoln had said that he didn't know of God was on the side of the North but the states of Missouri, Kentucky and Maryland must remain in the Union. Davis' gambled that the bombardment of Fort Sumter would possibly bring into the Confederacy seven more states with slave labor. Without these seven, the Confederacy might be to small to be a republic but too large to be an insane asylum, to borrow a turn of phrase from James Henry Hammond, a South Carolinian.

Goodheart offers a cogent description of the German revolutionaries who migrated after the failed 1848 insurrection. St. Louis' sooty atmosphere lodged on window panes as Germans drilled at night in beer halls, factory warehouses and gymnasiums. Floors covered with sawdust muffled stomping boots and absorbed saliva tinged with tobacco. The Forty Eighters recognized in the slave holders a similar attitude that the landed German nobility held towards wealth, political power and manual laborers. 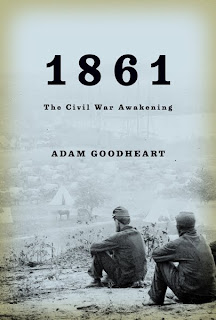 By May 9, Federal troops led by Nathaniel Lyon had the Confederates' Camp Jackson as a destination. With its capture things were going well for the Unionist. Gaurd by Germans, the parade of the prisoners through St.Louis' street lost what was gained that day. Secessionist bystanders spat, cursed, and threw clods of street mud. Bowie knives and revolvers began to appear. And then the war came. German newspaper buildings were burned and the city's wealthy loaded wagons with expensive furniture and fled across the river. For the next four years "Missouri would be the scene of atrocities unlike any seen elsewhere: ceasless guerrilla warfare that erased distinction between soldier and civilian almost entirely; violence with no greater strategic purpose than avenging the violence that had come before; in a few notorious instance, hundreds lined up and executed in cold blood. There would be many more shattered buildings, dead children and dead mothers, gutter awash in blood." [32]

Goodheart's use of primary sources with vivid details is a strength of this essay. Staying close to chronology and not digressing, his work is clear, crisp, and precise. If this article is representative of his coming book, 11861, then both casual readers and Civil War enthusiasts will be well served. CWL sees similarities between Bruce Catton's narrative style and Goodheart's. Catton's Army of the Potomac trilogy and his Centennial History of the Civil War, though 50 years old, are still appreciated by casual readers and history students.