Paul Revere's Ride, first published in The Atlantic's January 1861 issue, "is a poem about waking the dead." The dead are Northerners and black slaves. [46] Most readers above the age of 40 will recognize the phrases "Listen my children and you shall here/Of the midnight ride of Paul Revere. CWL doubts that most will under 40 years would readily place the author as Henry Wadsworth Longfellow.

Lepore notes that the poem is divided into two parts. The first and most familiar is the description of Boston during the night of April 18th, Revere, his horse and their journey together. The second part leaves Revere's fame behind and the muffled oars are not of British ships in the Boston harbor but those of phantom ships. The change hinges on the name of one of the British ships in the harbor. "The Somerset, British man-of-war; a phantom ship . . . ." To Longfellow and his 1861 audience 'Somerset' is the landmark 1772 legal decision which declared that slavery had never existed in England. [43]

The Somerset, British man-of-war;
A phantom ship, with each mast and spar
Across the moon like a prison bar,
And a huge black hulk, that was magnified
By its own reflection in the tide.

Lepore presents elements of Longfellow's The Witness to place light on the poet's intentions. In The Witnesses there are 'the bones of Slaves/They gleam from the abyss; They cry from yawing waves,"We are the Witnesses!" ' This theme of the dead giving testimony is is also in Revere's Ride.

Beneath, in the churchyard, lay the dead,
In their night encampment on the hill,
Wrapped in silence so deep and still
That he could hear, like a sentinel’s tread,
The watchful night-wind, 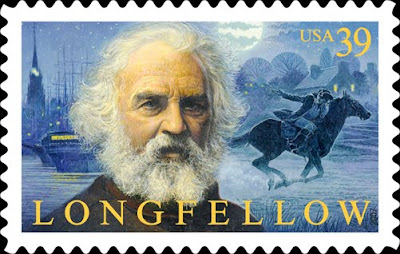 The poem finishes with Revere's very ride bearing witness both literally to the sleepers in the hamlets and metaphorically to the 1861 audience, when there 'is an hour of darkness and peril and need.' Longfellow wishes for the readers to act like patriots and 'waken and listen to hear a cry of alarm and 'the midnight message of Paul Revere.'

So through the night rode Paul Revere;
And so through the night went his cry of alarm
To every Middlesex village and farm,—
A cry of defiance, and not of fear,
A voice in the darkness, a knock at the door,
And a word that shall echo for evermore!
For, borne on the night-wind of the Past,
Through all our history, to the last,
In the hour of darkness and peril and need,
The people will waken and listen to hear
The hurrying hoof-beats of that steed,
And the midnight message of Paul Revere.

To put his work in a social context, Lepore uses Longfellow's other poems, his diaries, letters to and from his abolitionist friends including Senator Charles Sumner, a victim of a slaveholder's assault. In January 1861 Longfellow wrote in his diary, "The dissolution of the Union goes slowly on. Behind it all I hear the low murmur of the slaves, like the chorus in a Greek tragedy." Longfellow listened and heard the slaves humble chorus, a midnight message.