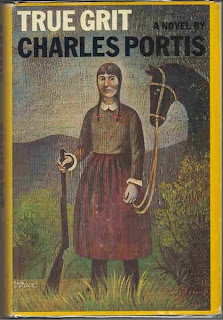 A bestseller when it was published in 1968, and the source document for two films, True Grit by Charles Portis is a masterpiece of short fiction and easily rests side by side with other first person monologue novels such as Huckleberry Finn, To Kill a Mockingbird, and Catcher in the Rye.

True Grit, a version of which was serially published in The Saturday Evening Post, was very popular during the late 1960s and early 1970s. In 1969 Hollywood produced a film staring John Wayne and spun off a sequel in 1975 also staring John Wayne. A third 'further adventures of' film was made for television in 1975. The novel began to drift off the required reading lists of college freshmen. Joel and Ethan Coen filmed True Grit that stayed very close to the novel which moved back on to the bestseller lists during late 2010 and early 2011.

The narrator is Maddie Ross, who in her 70s during the late 1920s, recounts her quest to seek vengance on the outlaw who killed her father, Frank Ross, when she was 14 years old in the 1870s. Tom Chaney murderer of a Texas senator, flees to Arkansas and murders Maddie's father there, then flees on Frank Ross' horse to the Indian country where he joins a band of bank robbers led by Lucky Ned Pepper.

Familiar with the Bible when she is both young and old, Maddie Ross is a literate, strong-willed, and a quick to speak woman. Maddie Ross finds a deputy U.S. Marshall who, in the words of the local sheriff,is the meanest, most pitliless, double tough man who knows no fear and loves to pull a cork. Overweight and blind in one eye, Rooster Cogburn has a small arsenal of weapons strapped to himself and his horse. He has developed his law enforcement tactics under the tutelage of Quantrill, the notorious Confederate partisan. In Maddie's eyes, Cogburn possesses true grit.

Maddie hires Cogburn Texas Ranger to capture Chaney. Cogburn is forced to accept the aid of Texas Ranger LaBoeuf, who is in pursuit of Chaney for his Texas murder. Maddie forces herself into the company of Cogburn andLeBoeuf. Each with very different motivations, the three ride into the Indian country to confront Ned Pepper's gang. By the end of the novel Ross, Cogburn and LaBoeuf have shared adventures, sustained injuries, and killed and desperados.

In recent remarks in his History News Network column Jim Cullen quotes the opening line in the novel which is Maddie's remark that " 'People do not give it credence that a fourteen-year-old girl could leave home and go off in the wintertime to avenge her father's blood but it did not seem so strange then, although it did not happen every day,' . The magic of this novel is the way its compellingly strange language and narrator come to seem palpably real. It is the great achievement of True Grit that it evokes a moment in U.S. history in all its ordinary, extraordinary wonder.' " 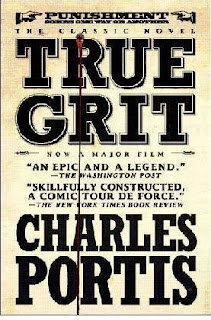 Cullen's remark about 'the magic of this novel' may also be true of Shaara's Killer Angels. The compelling language of Shaara's novel, Shelby Foote's Shiloh, and Howard Bahr's Black Flower do evoke incidents in America's Civil War history which are both ordinary and extraordinary moments in warfare.

Donna Tartt, author of The Secret History and reader on the True Grit audiobook, notes in her afterword in the 2004 edition of Portis' novel, that the story exists in an era when chivalry and the frontier coexist. Maddie's adventure occurs during a time when the Confederacy is past, Reconstruction is ending, and is narrated when Wild West shows are popular amusements are almost over, Woodrow Wilson has died and Al Smith is running from president. Maddie tell readers what she said in the 1870s and what she still holds true in the 1920s: "Men will live like billy goats if they are left alone" and "I would not put a thief in my mouth" when she refuses whiskey.

Donna Tartt's afterword is in the 2004 edition of the novel. An edited version of her afterword is found at the Language is A Virus website.

The top image is of the 1968 hardcover edition; the bottom image is of the 2010 paperback edition in which is Donna Tartt's afterword.
Posted by Rea Andrew Redd at 10:47 PM