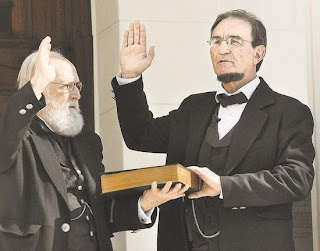 Short summary of SCV remarks at a reenactment of Jefferson Davis' inauguration on February 20, 2011.

Notions presented: Southern history is besieged like Harry Potter is besieged in a recent movie.

During the sesquicentennial people will be getting information on the history of the South from an anti-Confederate crowd, the politically correct crowd such as MSNBC, USAToday or the Southern Poverty Law Center.

Southerners with Confederate ancestors must stop the lies and must free people from their ignorance of the Confederacy and from their narrow mindeness, bigoty and intolerance regarding the original Confederates.

People of the Confederate states have been forced to the back of the bus. All we [the speaker and the audience] ask is to be left alone.