News---Gods and Generals Director's Cut Available for Purchase in May; Theatrical Premier in July at Manassas VA 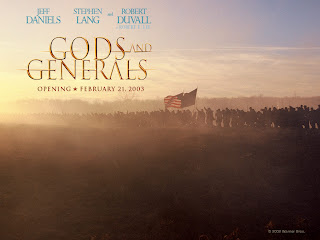 "Thank you for your interest in the Journey Through Hallowed Ground’s screening of the Directors Cut of Gods & Generals. I’ll add you to my Gods & General email list so when tickets are released you’ll be the first to know. I most certainly hope you can join us in Manassas, July 22 & 23.

Here’s a link that let’s you know all of the activities that are taking place that weekend for the 150th Commemoration of the First Battle of Manassas. http://www.manassascivilwar.org/home.aspx

CWL has learned that Gods and Generals Director's Cut is 289 minutes which is seven minutes longer than Maxwell's film Gettysburg. The director's cut of Gods and Generals will be available the third week of May and in BlueRay format.
Posted by Rea Andrew Redd at 2:23 PM