News---Smaller Than 145th, The 150th Antietam Reenactment To Be Held 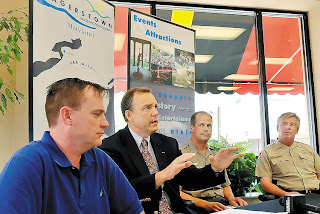 An estimated 4,000 Civil War re-enactors will stage a public re-enactment of the battles of South Mountain and Antietam on Sept. 8 and 9, 2012, on private land near Boonsboro, organizer Chris Anders said at a press conference Monday. The event, called “Maryland, My Maryland,” is being staged by The Southern Division, an all-volunteer re-enactment organization, and will be sponsored by the Hagerstown-Washington County Convention and Visitors Bureau, Anders said. Re-enactment of the Battle of Harpers Ferry might also be included, he said.

The event will be open to 2,000 spectators per day, and tickets will go on sale soon from the Convention and Visitors Bureau, he said. Tickets will cost $25 for one day or $40 for both days, CVB President Thomas B. Riford said. Those 6 and younger will be admitted free. All proceeds from the event will go to the Central Maryland Heritage League to help preserve and interpret South Mountain State Battlefield and to Brittany’s Hope Foundation, a charity that helps with the adoption of special-needs children worldwide, Anders said. The re-enactment will be held on about 100 acres of land at the foot of South Mountain near the intersection of Alt. U.S. 40 and Md. 67 east of Boonsboro.

“We’re setting up the event to be a very authentic event so people get a true Civil War experience,” Anders said. Anders said he has organized about 20 re-enactments and is a partner in Rear Rank Productions, which specializes in coordinating logistical aspects of re-enactment events, such as water and signs. His caps of 4,000 to 5,000 re-enactors and 2,000 spectators mean the event will be considerably smaller than the Battle of Antietam re-enactments staged in 1997 and 2002, which each attracted about 13,000 re-enactors and as many as 100,000 spectators. Anders said smaller numbers will allow for higher authenticity and better views for spectators.

“The goal is that people actually see what happened in September 1862, what the troops looked like, how they camped, how they fought, not a fantasy world-type representation thereof,” he said. Though the re-enactment commemorates the 150th anniversary of the Maryland Campaign, it is scheduled for several days before the actual dates of the battles to encourage visitors to attend commemorative events at the respective battlefields on the actual anniversary dates, Anders said. The Battle of South Mountain was fought Sept. 14, 1862, for the possession of three mountain passes — Crampton’s, Turner’s and Fox’s Gaps — and resulted in about 6,000 casualties, Riford said.

The Battle of Antietam, three days later on Sept. 17, was the bloodiest single-day battle in American history, with 23,110 casualties. Dan Spedden, superintendent of the South Mountain Recreation Area, announced at the same press conference Monday that the South Mountain State Battlefield’s sesquicentennial events will include the opening next spring of the battlefield’s first professionally designed museum exhibits.

The exhibits will be in three buildings — the visitors center at Washington Monument State Park, and the hall and lodge at Gathland State Park — and will interpret the Battle of South Mountain, Boonsboro’s Washington Monument, and the life of reporter and Civil War correspondent George Alfred Townsend. The buildings that will house the exhibits are under renovation and will open in April, with a ribbon-cutting ceremony in May, Spedden said. South Mountain State Battlefield’s commemorative events will include tours, hikes and living history displays each weekend beginning in June 2012. On Sept. 14 and 15, 2012, the battlefield will have living-history and artillery demonstrations, hikes and real-time battlefield tours, he said.

Top Image Caption: Thomas B. Riford, president of the Hagerstown-Washington County Convention and Visitors Bureau, leads a press conference Monday about the plans for the re-enactment of the 150th anniversary of the Battle of Antietam as re-enactment coordinator Chris Anders, left, and Ed Wenschhof, Antietam National Battlefield's acting superintendent and Dan Spedden, superintendent of the South Mountain Recreation Area, listen. (By Ric Dugan/Staff Photographer)

CWL: The Maryland, My Maryland website states that 1] reenactor registration opens in November, 2011 and 2] Confederate forces have re-branded themselves as States Rights Forces. Looking at #2 is kinda creepy.

Does that mean that the boys in gray will re-write history and out flank Federal forces at the Sunken Road, similiar to what happened at the last Antietam reenactment five years ago? Why can't the Confederates just be Confederates? The Federals are still the Federals. Maybe the organizers couldn't get away with calling the Federal army the Abolitionist army?