New and Noteworthy---Civil War Sketch Book: Drawings From The Battlefront 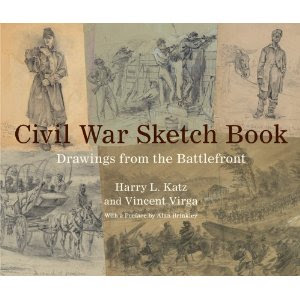 From The Publisher: At a time before the camera lens could capture the frenzy and terror of battle action, illustrators known as “Special Artists”—among them such famous draftsmen as Winslow Homer and Thomas Nast—created for the American public some of the most important and lasting images of the Civil War. Reporting for newspapers like Harper’s Weekly and Frank Leslie’s Illustrated News, the Specials brought a visceral immediacy to the clash, presenting rich and nuanced images of soldiers in the camps and sweeping panoramas of the great battles. The illustrations span the war and its many theaters, including rarely seen views of Shiloh, Antietam, Vicksburg, and Gettysburg, and the famous stampede of Union soldiers fleeing the Rebels at Bull Run. Gathering these images for the first time in fifty years, Civil War Sketch Book gives readers the sense that they are touching history, for the illustrations (some even stained with soldiers’ blood) represent priceless artifacts from our nation’s greatest conflict.

CWL: The advance copy received today is stunning. Katz, a former curator for the Library of Congress, and Virga, a illustration historian, have selected 250 drawings by illustrators and soldiers. Long time readers of Civil War literature may recognize some but the breadth of this collection appears to offer other drawings that are less familiar probably not previously published. It appears that the majority of the illustrations are not from newspapers but are battlefield sketches submitted to the newspaper. Soldiers' works are well represented. The text offers detailed captions that include the artist, the date of composition and where the drawing is held today. Additionally, the text provides a discussion of the artists, their practices and their eyewitness accounts. Photographs of the sketch artists are included. Reenactors, 19th century popular culture enthusiasts, and general readers will enjoy such drawings as Henri Lovie's Foraging Secesh Oats and The Kitchen of Fremont Dragoons, Fairgrounds, Tipton, Maryland, and Frank Schell's Passage Down the Ohio of General Negley's Pennsylvania Brigade, October 1861 and the other 247 battlefront sketches.
Posted by Rea Andrew Redd at 10:43 AM