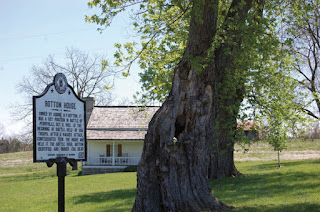 Much like winning a battle one field at a time, Perryville continues to capture more of the land that shaped the identity of a region and, ultimately, a nation. James R. Overstreet and Pat W. and Lora June Overstreet have transferred ownership of more than 140 acres on Hayes-May Road to the Civil War Preservation Trust for $725,000, according to a deed filed recently at the Boyle County Clerk’s Office.
Joni L. House, preservation specialist and program coordinator for Perryville Battlefield State Historical Site, said the acquisition represents an opportunity  to keep a piece of history intact that might otherwise be lost to development. “In Franklin, Tenn., the site of a historical battle was only preserved after the tract was purchased and the Pizza Hut that had been built on there torn down,” she said.
The Civil War Preservation Trust is a national non-profit supported by donors who believe like House does that such areas should be off limits to development and available for future generations. House was raised on battlegrounds by a father who was a history teacher. Her husband and son are re-enactors, and their home resembles those of the Civil War era. “Ihave a churn, and I even know how to use it,” she said. “My middle name is ‘Lee’ if that tells you anything,” she said, an apparent reference to Robert E. Lee, general of the Confederate army.
The latest property acquisition in Perryville picks up where the gravel road that intersects the battlefield ends. “It is the land that surrounds the Bottom House,” she said. According to House, H.P. Bottom went to bed one night the first week of October 1862 a wealthy man comfortable in his place in the world and woke up in a world that would never be the same with all he knew destroyed by a war in his own backyard. “I think we are still suffering on some levels from what happened here,” House said, speaking about the economic direction the town was headed before war set it back.
The beautiful rolling green hills became “hell on earth” littered with the dead and dying, she said. Preservation of the battlefield pays homage to the 2,500 who died. The Civil War Preservation Trust hopes to acquire even more land in the area. It is soliciting donations to purchase a 122-acre tract known as the “Slaughter Pen.” Other property for potential purchase includes a 60-70 acre tract. According to the trust website (www.civilwar.org/battlefields/perryville.html), every $1 donated multiplies to $3.28 because of available matching and other grants. Registration is also now open at www.perryvillebattlefield.org to participate in the 150th commemoration of the Battle of Perryville scheduled for Oct. 5-7 in which 100 percent of funds raised will go toward preservation efforts.