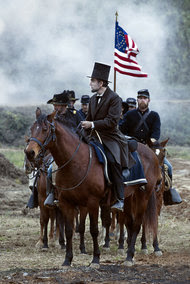 "After a brutal, kinetic beginning — a scene of muddy, hand-to-hand combat that evokes the opening of Saving Private Ryan  “Lincoln” settles down into what looks like the familiar pageantry and speechifying of costume drama. A flock of first-rate character actors parades by in the heavy woolen plumage of the past".

"The script, by Tony Kushner is attentive to the idioms of the time without being too showy about it. Lincoln is eloquent in the manner of the self-taught provincial prodigy he was, his speech informed by voracious reading and also by the tall tales and dirty jokes he heard growing up in the frontier country of Kentucky and Illinois. He uses words like “shindee” and “flib-flub” and likes to regale (and exasperate) his cabinet with homespun parables, shaggy dog stories and bits of outhouse humor. His salty native wit is complemented by the clear and lofty lyricism that has come down to us in his great speeches."

"The main business of “Lincoln” is framed by two of those, the Gettysburg Address — quoted back to the president by awed Union soldiers on a January night in 1865 — and his Second Inaugural Address, which he delivered a little more than a month before the end of the Civil War and his own assassination. These are big, famous words and momentous events, and the task Mr. Spielberg and Mr. Kushner have set themselves is to make this well-known story fresh and surprising. Mr. Day-Lewis, for his part, must convey both the human particularity and the greatness of a man who is among the most familiar and the most enigmatic of American leaders. We carry him around in our pockets every day, and yet we still argue and wonder about who he was."

"This is, in other words, less a biopic than a political thriller, a civics lesson that is energetically staged and alive with moral energy. Lincoln, having just won re-election, faces a complex predicament. The war has turned in the Union’s favor, but the Capitol is in some turmoil. Lincoln must contend with a Democratic opposition that reviles him as a dictator (“Abraham Africanus,” they call him) and also with a deep, factional split within the Republican Party. "

"The question facing Lincoln is stark: Should he abolish slavery, once and for all, even if it means prolonging the war? The full weight and scale of this dilemma are the central lesson “Lincoln” asks us to grasp. The film places slavery at the center of the story, emphatically countering the revisionist tendency to see some other, more abstract thing — states’ rights, Southern culture, industrial capitalism — as the real cause of the Civil War."

" . . . this is finally a movie about how difficult and costly it has been for the United States to recognize the full and equal humanity of black people."

"There is no end to this story, which may be why Mr. Spielberg’s much-noted fondness for multiple denouements is in evidence here. There are at least five moments at which the narrative and the themes seem to have arrived at a place of rest. (The most moving for me is a quiet scene when the 13th Amendment is read aloud. I won’t give away by whom.) But the movie keeps going, building a symphony of tragedy and hope that celebrates Lincoln’s great triumph while acknowledging the terror, disappointment and other complications to come."