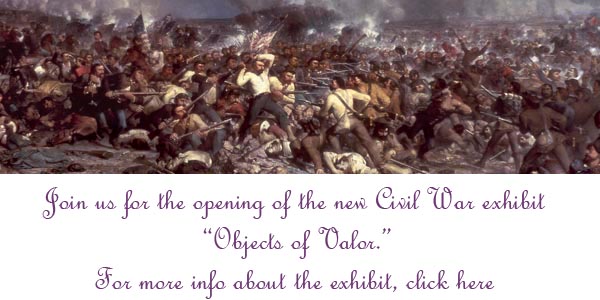 Gettysburg isn't the only place where Civil War buffs can see paintings, uniforms and artifacts related to the historic three-day battle fought in July 1863. The State Museum of Pennsylvania is getting in on the act also.

Starting Friday, an exhibit called "Objects of Valor" will open at the museum, located on Third Street across from the state Capitol. The exhibit is designed to "commemorate the Civil War in Pennsylvania," said the Pennsylvania Historical and Museum Commission in a statement.
Perhaps the most noteworthy item in the exhibit is a large painting depicting the unsuccessful charge by Confederate Gen. George Pickett's troops against Union forces on July 3, 1863, in which hundreds of men on both sides were killed or wounded. Its ultimate failure to dislodge Union troops from their lines led Confederate Gen. Robert E. Lee to pull his forces back to Virginia the next day. This painting -- 16 feet high and 32 feet wide -- was commissioned by the state Legislature in 1865, the year the war ended, and was completed in 1870 by a Luzerne County artist named Peter F. Rothermel. There will be interactive panels beside the painting that visitors can use to get information about Pickett's Charge and about how the painting came to be done.

"The exhibit tells of the painstaking research conducted by Rothermel and its much-anticipated unveiling in 1870 at the Academy of Music in Philadelphia," museum officials said. The Rothermel painting of "Pickett's Charge" is done on a single canvas, and is completely different from what is probably a better-known artwork that also depicts Pickett's Charge -- a 42-foot high, 377-foot Cyclorama painting that was created in the early 1880s by a French artist, Paul Philippoteaux. That one hangs in a circular gallery inside the National Military Park and Visitors Center in Gettysburg, which is run by the National Park Service.

Other Civil War artifacts that will go on display at the state museum in Harrisburg include a chair that Gen. George Meade, the Union commander at Gettysburg, used in his headquarters on the battlefield; a musket that a 69-year-old civilian named John L. Burns used to help defend Union soldiers at Gettysburg; and various pieces of shot and shell taken from the battlefield. Also on display will be recent acquisitions of uniforms, weapons and tools used by African-American soldiers who fought in the Civil War -- some of them former slaves -- who were members of a unit called the United States Colored Troops.

Other items that have been donated by military veterans and their families over the past 100 years will also be available for viewing, including swords, sashes and paintings of Civil War generals as well as "everyday items saved by common soldiers to memorialize their war experience," museum officials said.  The Harrisburg museum (www.statemuseumpa.org or 1-717-705-8639) is open from 9 a.m. to 5 p.m. Wednesday to Saturday and from noon to 5 p.m. Sunday. Admission is $5 for adults and $4 for children and senior citizens. The Historical and Museum Commission, based in Harrisburg, operates 25 historical sites and museums around the state.