New and Noteworthy---- Rape, Reality, and Recovering Testimonies During the Civil War Era 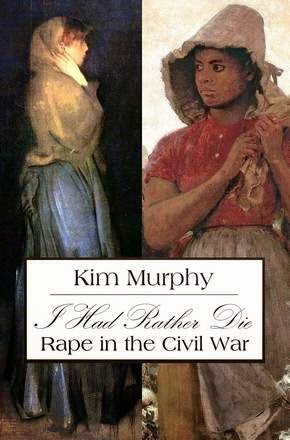 Reviewed by Laura Mammina (University of Alabama)
Published on H-CivWar (December, 2014)
Review's Text:
Kim Murphy’s I Had Rather Die is the first book-length project examining sexual violence during the Civil War. In it she levels some rather damning although not unwarranted charges against historians who argue that the conflict was a low-rape war. Murphy persuasively asserts that focusing on the number of rapes stems from a misguided assumption that calculations reveal something meaningful about wartime sexual violence. By reframing rape as a crime of power, she attempts to sidestep the numbers game in order to expose a seemingly genteel and restrained Victorian society that in reality provided few protections for white and black rape victims and often freed convicted rapists.
Murphy frames her study by examining the evolution of rape law in early America. Legal standards, informed by popular conceptions that rape was a detestable crime but also a charge that was easily made, placed the burden of proof on the rape victim by requiring her to testify that she had cried for help, had physically resisted the assault, had not enjoyed the sexual act, and had notified someone soon after the encounter. Inability to prove any of these could result in the charges being dropped or reduced. Murphy notes that for centuries the American legal system applied these protections only to white women and that black men received much harsher sentences for the crime of rape than white men. Even white women found their trustworthiness questioned during rape trials, as the admission of character evidence in the nineteenth century allowed courts to judge the veracity of a woman’s rape claim on her past sexual history. Here Murphy misses an opportunity to link the admission of character evidence to emerging nineteenth-century ideas, which, as Sharon Block argues, held women to be innately virtuous. This meant that they had a responsibility to control their own passions as well as men’s base urges. Even so, Murphy does well to argue that such a high burden of proof for rape might have discouraged women from charging their assailants.[1]
Antebellum patterns persisted in wartime courts-martial as racial, class, and gender bias resulted in light sentences and low rates of conviction. Murphy finds that black soldiers faced harsher prosecutions for rape than white soldiers, especially if they raped white women, and yet the Union army executed few black men for the capital crime of rape. White soldiers executed for rape were overwhelmingly privates and many were German or Irish immigrants, while white officers faced very light punishment when convicted of rape. White and black soldiers who raped black women were given lighter sentences than those who raped white women, while soldiers who raped wealthy white women received the harshest punishments. But no matter who the victim was, Murphy finds that soldiers accused of rape often had their sentences reduced or were given pardons unless there was a male witness to the crime.
While Murphy’s evidence is detailed, she seems more comfortable describing her findings rather than incorporating them into a more sustained argument. Because of this, she never fully examines the ways in which rape highlighted the discrepancy between Victorian morality and tolerance for male misbehavior or the ways in which rape reinforced or destabilized social hierarchies. Murphy is also unable to fill a void in current scholarship by linking her findings to many excellent recent studies on rape in the United States. It is left to future scholarship to demonstrate the ways in which wartime rape trials differed from or conformed to patterns established before and after the war.
Throughout the book, Murphy argues that misogyny in the American legal system, not Victorian restraint, is the reason that relatively few Civil War soldiers faced court-martial for rape. Frequent accounts of rape in archival sources as well as the surgeon general’s documented 170,000 cases of gonorrhea and syphilis demonstrate that Civil War soldiers hardly refrained from sexual encounters whether forced or consensual. But Murphy succumbs to the same allure of numbers as the historians she criticizes by insisting that unsubstantiated reports in newspapers and private papers should be treated as instances of sexual assault. Instead of using the reports to examine how fear and perception operated during the war, Murphy focuses on numbers, undermining her own claims that rape often went unreported. As Murphy well knows, the crime of rape defies precise counting especially in the nineteenth century and especially during a time of war because it is an intimate crime so tied up in sexuality, and therefore in power, fear, violence, and shame that the strands become nearly impossible to unravel. While her study tries to fill the void in scholarship on rape during the Civil War, it never quite addresses how sexual violence illuminated relationships of power. It does, however, begin a conversation that is long overdue.
[1]. Sharon Block, Rape and Sexual Power in Early America (Chapel Hill: University of North Carolina Press, 2006), 44, 50, 129-137.
Full Text Source: H-Net Reviews